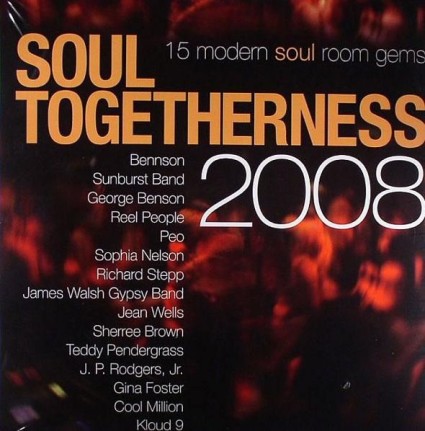 The groove isn’t gonna stop anytime soon with Expansion Records‘ Richard Searling & Ralph Tee. These cats conjured up another round of soul treasures meant to keep your head boppin’ from the collection presenting “Soul Togetherness 2008.” Tracks representative of fine music coming from fans attending many of their ‘Togetherness’ events. And yes, the quality of soul music is irresistible, everlasting & contagious.

15 tracks guaranteed to keep your feet dancing & hips swaying! After 23 years of being on top of their game from Europe to throughout the world, this record label is not missing a beat, nor shows signs of slowing down the pace. I was pretty humbled with the significant amount of soul/retro 80’s jams I thought for sure was already in my record & CD collection. Boy was I wrong!

Australian artist Bennson’s “Let The Love”jumped out immediately to that old school R&B sound & grabbed the attention of the dance floor in a hurry!; The massive retro dance jam, “Put A Love Lyric In It” by Dave Lee’s “The Sunburst Band” (look above) had to be the best track on the CD, but I may be speaking too early. I stayed on that track during the review for so long, I had to take a break & chill for a moment. Reflective of the hip, funky bassline, guitar savvy groove punchline, I knew this was going to slow me down. The music reminded me of familiar sounds to Classic R&B groups Change & Chic. Maybe even Evelyn ‘Champagne’ King.; George Benson stepped into room with his reprisal of “When Love Comes Calling”. The sounds was actually touched up by Incognitos lead man Bluey & the rest is history. Do I have to say anymore?

In fact, this one startled me because I didn’t know Teddy Pendergrass had this one out. Thanks to the Expansion Records team, they discovered this track off a soundtrack called “Where I Find My People” last year in 2007. Not known too familiar to the public, better yet the world, Expansion jumped all over it & was able to get it dropped for the ‘Togetherness’ project. Good Job Expansion!!

A couple of older tracks made the grade, expanding the deep trenches of soul music into an otherwise overall massive mix of new cuts that makes your CD purchasing investment well worth it. A wonderful compilation that left me wondering if I have to go their Expansion Records website to have them rush me the rest of their previous ‘Togetherness’ collections! I dig stuff like this. Pure, classy, enjoyable soul tracks that stands the test of time. And ultimately keeping the fun on the dance floor more exciting as the days go by.