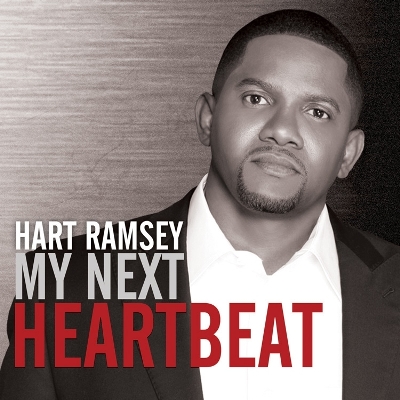 Hart Ramsey | My Next Heartbeat
by Brent Faulkner

Producer, jazz pianist, and pastor Hart Ramsey returns with his
sophomore smooth jazz effort, My Next Heartbeat. On Heartbeat, Hart
Ramsey assembles a cast of talented musicians to support him. Having had
the opportunity of reflecting on Ramsey’s debut effort, my enthusiasm
to reflect upon his sophomore effort was high. My Next Heartbeat is
another solid album comparable at times to Ramsey’s debut, even if it is
a shade less enthralling. Throughout the thirteen solid cuts, Ramsey’s
musicianship and creativity shines brightly, even through less standout
cuts. If nothing else is notable about My Next Heartbeat, Ramsey’s
passion and musicianship are certainly present through its seventy
minute duration.

“Two Roads” is a mid-tempo, easy-listening opener. While solid, there
is a ‘lack of urgency,’ making “Two Roads” enjoyable, but perhaps a bit
‘too casual.’ Regardless, saxophonist Kelley O’Neill delivers a great
saxophone solo and riffs throughout. Sean Michael Ray, also a
co-songwriter, delivers a fine sounding slap bass, not to mention
Ramsey’s own superb electric piano solo. Pleasant, “Two Roads” yearns
for more ‘pizzaz.’ Ramsey, the great musician and producer that he is,
delivers the goods on standout “Written in Red,” which features grand
MIDI synthesized horns and programming by the master himself. More
exciting and ‘urgent’ than the opener, Ramsey delivers given his smart
harmonic progression, and his use of differentiation and variation on
this particular cut. His acoustic piano playing is ‘none too shabby’ in
itself. The chivalrous “The Commitment” adds soulful vocals by Robert
Moe: “I’ll never leave you/I’ll never go away.” Ramsey’s comping is
superb; the production – where the volume levels of the acoustic piano
are raised as the prominent part – is a reflection of Ramsey’s high IQ
as both a musician and producer. Somewhat like the first cut, “The
Commitment” could use an extra ‘push,’ but given it’s laid back,
R&B-crossover feel, the ‘chill-factor’ of “The Commitment” is more
than effective.

“See Into Me” has a moodier quality than previous cuts. Kevin O’Neill’s
saxophone playing is low-key for the most part, until a rousing solo
appears closer to the end of the cut. Ramsey as always impresses as a
performer and producer. The main issue is the length, with this cut
clocking in over six minutes. “Look You in the Face” is one of the
album’s highlights, featuring one of the most laid-back, yet addictive
grooves of the effort. The use of muted trumpet (Joey Summerville) in
tandem with Ramsey’s acoustic piano lines is definitely ‘celestial.’
Ramsey’s electric piano patch as a backdrop is well conceived, as is
Rick Watford’s subtle, soulful guitar. The title track (“My Next
Heartbeat”) doesn’t lose any momentum, with Ramsey’s musicianship
accentuated at the upmost level. Again, the MIDI orchestrations are
beautiful, and the tasteful contributions from Kelley O’Neill on sax and
Eric Essix on guitar make “My Next Heartbeat” a winner. Six tracks in,
Ramsey does not ‘drop the ball.’

“In Spite of Myself” is enjoyable, though not revolutionary. That said,
Rick Watford’s guitar work is exceptional and highlights the cut.
“Until The End of Time” and “Merry Heart (Like Medicine)” similarly are
strong, though not necessarily the ‘cream of the crop.’ “Cover Me” is
lovely, featuring a solid underlying harmonic progression and an
incredibly ‘fiery,’ though low-key groove. Ramsey’s soloing on
keyboards is superb while O’Neill shines as always. “Start Now” is
pleasant while penultimate cut “The Better Part” sounds a bit too
similar to previous cuts. “Don’t Be Afraid to Try Again” ends the album
solid enough with its R&B-ish groove.

Overall, My Next Heartbeat is solid. The main flaw might be the length
and repetitiveness of a couple of tracks. At seventy minutes, the album
runs a bit long as a whole. Flaws aside, Ramsey has delivered another
solid smooth jazz affair. Even if it’s not as exciting as his debut at
times, this sophomore album shows how powerful and noteworthy Ramsey’s
musicianship is. Furthermore, there is definitely a certain
spiritualness given off by Ramsey’s uplifting music.