Cuban/Puerto Rican singer/songwriter Angela Bofill’s debut album, Angie, arrived in 1978 on the then-new audiophile GRP Records label. She offered a first class blend of jazz, soul, pop and Latin strains that showed tremendous promise. The quality of her music and career took several twists and turns from that point to now with most agreeing that of her ten studio recordings, the first four Arista-distributed albums in the late `70s/early `80s (and an underrated CD she recorded in 1996 for Shanachie Records titled Love in Slow Motion) are her finest. There has never been another artist quite like Bofill in that she has earned staple classics in all four of the above genres but is most lovingly recalled as a pioneering queen of the Quiet Storm. 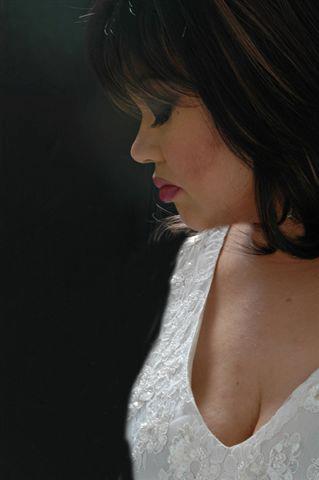 Tragedy struck for Bofill via strokes she suffered in January 2006 and July 2007. With the love and support of family and friends, she has convalesced and received therapy that now enables her to occasionally do unique shows she calls “The Angela Bofill Experience.” Ms. Bofill is unable to sing at this time, so what she does is share life stories in her own “sit down comedienne” style while a band led by her longtime friend flautist Dave Valentin and featuring singer Maysa Leak perform her classic songs. That unit flew into the posh yet comfy supper club Anthology in San Diego, California to grace her Southern California fans with song. I faithfully made the two-hour drive down to catch the first set and see what it was all about. What followed was bittersweet.

The band got its bearings by setting the mood with John Coltrane’s classic “Equinox.” Then Maysa and backup singer Angela Phillips stepped out for Bofill’s theme “Angel of the Night,” in the middle of which Angie was ushered to the stage to a respectful standing ovation. The lady looked great in a black suit with a white blouse and a stylish cane. She had clearly lost quite a bit of weight – a long struggled for triumph. As one would expect, Ms. Bofill’s speech, though much improved, is still a bit labored, but the ever effervescent entertainer compensated for this with her innate charm and humor. Sure there were a few awkward moments, delayed cues and pregnant pauses, but it mattered little. What the people came to do was not so much see a slick show as spend a genuine intimate evening with a musical friend.

The music continued with a bumpin’ thump through Angie’s Narada Michael Walden-produced club smash “Too Tough.” On this number, they superimposed footage in sync with the band of Angie performing the number on “Soul Train” to funky effect. This was followed by the glorious “This Time I’ll Be Sweeter,” a song that Angie recorded the definitive version AFTER recordings by veterans such as Martha Reeves and Roberta Flack. Maysa empathetically tapped into the same sincere tenderness that set Angie’s version head and shoulders above the rest. Then in perhaps the most sentimental portion of the program, Angie shared the sad news of her nephew’s tragic passing in a car accident. What followed was a slide show of his life set to the piano and orchestra accompanied strains of the original recording of a song she wrote for him shortly after he was born titled “Little Pas (Rainbow Child).”

Picking up the pace, the group (anchored by bassist Kevin Walker and drummer Greg Phillips) next dived into the mid-tempo groove tune “What I Wouldn’t Do (For the Love of You)” on which Angie was moved to gleefully bonk away on cowbell. Special guest Marion Meadows on soprano sax and Valentin on flute playfully traded 8s and 4s on this one, extending the feel good vibrations of the groove. Meadows also shared about how deeply Bofill’s music inspired him as a musician in his college days after he went to see her in concert. Then came a powerful rendition of Angie’s anthemic ballad “I’m On Your Side” which featured some especially reverent piano playing by Moe Daniels. What could this band possibly do to top all of this? They turned to the song that the majority of those present were most anticipating: “I Try.”

“I Try” is to Angela Bofill what “Guess Who I Saw Today” is to Nancy Wilson. It remains her signature and is still played regularly on Urban AC and Jazz radio stations. She wrote the song (which opened her 1979 sophomore album Angel of the Night) about a drummer boyfriend that did her wrong. In a simpatico twist of fate, singer Maysa just recently experienced a breakup and duly poured her heart into the song with a passion that made the number easily the highlight of the set. It didn’t hurt that Maysa had also just recorded her own version of the song for her just released new CD, Motions of Love (Shanachie). Moving from improvised punctuations at the end and some impressive jazz scatting, she dipped into some vocal areas that transcended the more commercial aspects of her own albums. Even Angie herself was sitting transfixed. There was also a comic moment when Maysa got carried away singing about how she cooked and cleaned for her do-wrong man which snapped Angie out of her blissful spell to shake her head vigorously “no” and wave her finger at the crowd as if to emphasize, “That wasn’t part of my script!”

The warmth of the presentation overall was matched by the cozy class of the state of the art concert venue. With its soft lighting, tasteful art pieces on the wall, plus the sexy nooks and crannies to be found on all three floors, I dare say Anthology is so lovely you want to kick your shoes off and stay awhile…if not all out move in. Indeed, during the second set, there was dancing in the aisles – fast and slow – and some bawdier commentary from Bofill more apropos for “the late show.”

“The Angela Bofill Experience” is a once-in-a-lifetime hang with a truly special artist…but one’s heart must be prepared.