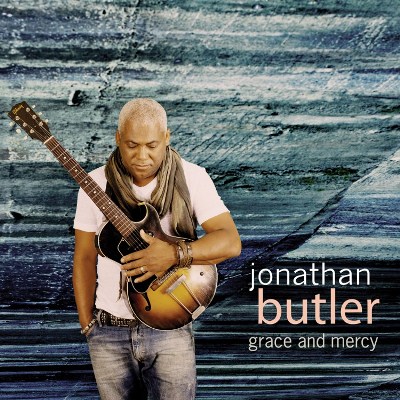 Jonathan Butler signed his first recording contract at twelve years old.  By the time he was fifteen, he was already an established recording artist in his native South Africa.  By his own admission, he was also a drug addict whose soul was seeking salvation.  Guidance would come through a friendship with a fan who introduced him to the Christian faith.  That fan would later become his brother in law.  By nineteen, Butler dedicated his life to Christ and never looked back.  It is that conviction we hear so vividly on his third gospel release Grace and Mercy.

A pleasant surprise for some might be the upbeat joy of tracks like “You’re All That I Need” and “Who is Like the Lord.”  Butler’s voice sounds as comfortable on these more contemporary gospel leanings as it does on “Falling in Love With Jesus”, the hit ballad originally recorded for Kirk Whalum’s 2002 album Gospel According to Jazz: Chapter 2, and also featured on Butler’s first full gospel offering, 2004’s The Worship Project.

Anchoring this project nicely is Butler’s penchant for simple but powerful melodies.  Those who particularly enjoyed “Falling in Love With Jesus” will feel the anointing of “I Know He Cares” (Butler’s favorite track on the album) and the soaring “I Stand On Your Word,” the album’s lead single.  Often underrated as a vocalist, Butler’s voice especially shines on these tracks.

Other offerings include “Trials” with its sing along, catchy hook; “Don’t Walk Away” with a mid-tempo steppers groove; and the reggae-lite feel of “Give it Up to God.” Through it all, Butler doesn’t abandon his trademark acoustic guitar and his lyrical pen stays true to uplifting the name of the Lord with this largely upbeat collection of tunes.