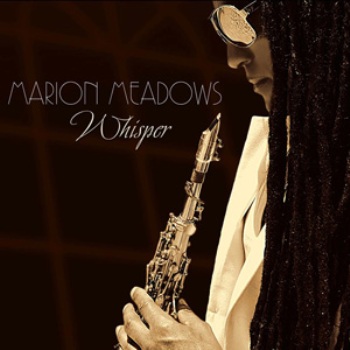 Once a musician has established their fan base, their confidence is even more solidified as they build a particular signature sound and boost the artistic integrity. Marion Meadows has not only built a solid reputation in the industry alongside Will Downing, Norman Connors and the like, he has become a staunch advocate for the cause of contemporary and smooth jazz
and is unafraid of tooting his own horn (pun somewhat intended).   Since he stepped out as a solo artist over two decades ago, the saxophonist has fully expressed his opinion for keeping the music unquestionably real without compromising what the current contemporary jazz market is dictating to obtain commercial success. And Meadows remains firm to his
principles with eleven albums to his credit that oozes with his trademark soul, funk and Latin grooves. His latest contribution, Whisper, expands upon his usual urban shades while adding a few more world music tidbits and paying homage to smooth jazz’s glory days.

“The Visitor” easily blends subtle funk with a Japanese koto, syncopated strings and an atmospheric backdrop, a nice change up from some of the standardized smooth jazz fare. “Black Pearl” shares some similarities with “The Visitor” but lacks the energy of the former. Meadows soprano sax gently whispers throughout the title track accented by acoustic guitar and a quiet Latin dressing. The slow paced gem, “Timeless,” provides more improvisation and a unique melodic and harmonic sense that could easily cross over to the traditional jazz format. This is one area where Meadows shines the brightest when he explores his roots inspired by mentors Joe Henderson and Eddie Daniels. However, a few tracks on Whisper hinder his obvious talents such as “Magic Life” and “Golden Curtain” that stick to the groove-driven smooth jazz path which sometimes drains the energy and the creativity level. Thankfully, the pattern changes with “Bottoms Up,” and Freddie Hubbard’s “Sky Dive,” with its marinating subtle funk swagger; two important reminder of how labels like CTI in the late sixties opened the doors to the smooth jazz movement. Also of note is “Wild Thing,” where Meadows digs deep into a Soul Train vibe (I smell a house music remix right about now).

Undoubtedly, Meadows is more than capable as a jazz musician, especially when he reflects his soul-charged musical personality and revisits his humble beginnings. Those are the moments throughout Whisper that save this from becoming a complete disappointment. On the other hand, I’m also sure Meadows will always be quite content in his own musical skin, which is what counts with the fans when all is said and done.

Three and three-quarter stars out of five.