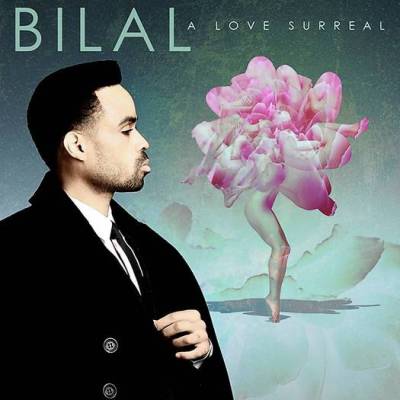 Bilal | A Love Surreal
Entertainment One Music
by Brent Faulkner

Within 2012-2013’s soul realm, enthusiasm seems to be most concentrated
within the alternative-R&B wing, led by burgeoning, eclectic artists
including Frank Ocean, Miguel, and The Weeknd. Before the newly
incited alt-R&B movement,….eclecticism, creativity, and the ‘will to
be different’ approach already pulsated through soul darling, Bilal
Oliver. 2013’s highly anticipated A Love Surreal (released via eOne)
continues to exhibit exceptional musicianship and stylistic flexibility
Bilal has showcased from years in the game. A more sensually-driven
effort than 2010’s Grammy-nominated Airtight’s Revenge
(Urban/Alternative performance for “All Matter” with Robert Glasper) , A
Love Surreal seems to connect more. Co-writing/producing throughout,
Bilal shares duties with Shafiq Husayn (of urban group Sa Ra), Steve
Mckie (Jazmine Sullivan), and Corey Bernhard (Vivian Green) amongst
others.

Featuring numerous elite cuts, the trio of “West Side Story”, “Back To
Love”, and “Winning Hard” are unstoppable juggernauts. “West Side Girl”
is equal parts funky and romantic-minded, finding Bilal delivering a
slew of flirtatious lines to his potential lady love (“…Look like you
took your good shoes off the shelf…and you shine so bright, that I
could only see you and nobody else…”). On the optimistic promo single
“Back To Love”, he delivers compellingly over superb jazzed-up-soul
production work, keeping things simple, yet thoughtful on the chorus:
“How do we get back to love? Back to love?” “Winning Hard” is a
showstopper, highlighted by clever songwriting and one of the album’s
strongest neo-soul propelled productions (Bilal, McKie, Conley
Whitfield, Mike Severson, Bernhard). Bilal praises and charms his girl
in lofty fashion, comparing her love to a strong performance in the game
of cards: “A game change, I’m on the roll / Dealer hit me again / yeah
we’re winning again, I’m on the roll…” All three are knockouts.

Bilal doesn’t stop with three noteworthy cuts – he continues to deliver
quality and consistency. “Climbing” and “Longing and Waiting” both
thrive on being risqué, suggestive, and as always soulful. “Right At The
Core” and “Slipping Away” serves as the antithesis thematically,
dabbling in issues of heartbreak, encouraging listener empathy
(“Slipping away, your love is slipping way… what can I do to change your
mind?”). On “Astray”, Bilal’s masterful falsetto is more than enough to
allure by itself. “Butterfly” a sensational track (featuring pianist
Robert Glasper), benefits from being stripped, contrasting the denser
musical cuts. Closing full-length cut “The Flow” is Bilal’s alt-side at
its best, arguably the closest allusion and extension of his material
from Airtight’s Revenge.

Overall, A Love Surreal is yet another superb addition to Bilal’s rich
discography; Bilal NEVER loses focus. Vocally and musically, this effort
is simply ‘delightful’. Given its consistency and investment into the
matters of the heart, A Love Surreal provides more accessibility than
previous effort Airtight’s Revenge, which possessed more conceptual
flare to some extent. Even so, accessibility certainly does NOT
inhibit Bilal from being “Bilal”. He plays a sensational balancing act,
and delivers capably. The verdict?