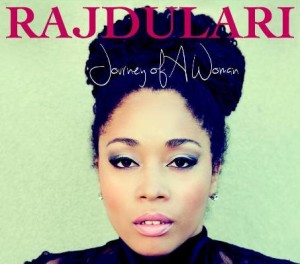 Rajdulari | Journey of a Woman
By Peggy Oliver

Through the ever increasing social media tools, musicians are masterminding their Facebook page and hash tagging like crazy towards their fans and music industry insiders about their latest achievements in their career. When a relatively unknown artist is already tweeting about their road to the Grammy Awards, this could be someone with a justified confidence or they are stroking their ego a bit more then they should. Singer/songwriter Rajdulari’s Twitter handle: #Journey2TheGrammys was one of the first items that caught my eye. After inspecting her 2011 debut disc, Honeywine, the Grammy hype is more than justified. Rajdulari fuels her fiery spirit by channeling her jazz heroes Billie Holliday and Sarah Vaughn and 70’s soul and funk, the music of her life. She equally respects Stevie Wonder because of his commitment to timeless music.

In turn, there is much to respect about Rajdulari’s special blend of contemporary urban and acoustic jazz, peppered by empowering messages. Her explosive, assertive voice was the ultimate star of Honeywine. Yet the spoken word piece “America,” an condensed tour of Black History’s trends and what might be deemed her career theme, “Purpose (AKA Grammy Anthem),” were two compelling reasons Rajdulari was not any ordinary songstress.

The sophomore release, Journey of a Woman, finds Rajdulari dissecting a personal journey of romance, being single and sheer honest insight. The title track documents her behind the scenes tale to the stage that she is adamant to share with jazzy soul swagger and a ball of fire gospel breakdown carrying the second half. “Natural” cuts to the quick as Rajdulari preaches that visuals never outweigh one’s heart: “I ain’t never been a skinny girl/I’ve got curves you can see across the world/But I’m a real strong sister with a big old dream/You should never judge a book by its cover you see.”

Rajdulari administers some advise on the ever popular subject of “Peace” in this mellow philosophical message to handle challenges: “You have got no time for the pain, fear, stress, worry/Let it all go to busy being scared, tired…and full of anxiety.” “Real Love” continues the counseling session, this time on the subject of romance from a single ladies perspective: “Now see you might think it’s right to have a temporary life/But why waste good love on the wrong guy.”

Rajdulari breathes exceptional life on two urban classics. The often sampled Mtume hip-hop/R&B jam, “Juicy,” is completely flipped with neo-soul spunk and the Tina Turner signature smash, “What’s Love Got 2 Do With It,” is highlighted by a delightful conversation between the vocalist and violinist Monique Brooks-Roberts.

A quintet under the guidance of producer/keyboardist Aaron Brooks-Roberts balances a colorful modern jazz canvas sprinkled with neo-soul, R&B and funk. However, once again, Rajdulari commands the listener’s attention proving her musicality and confidence are all significant attributes regarding any Grammy tweets she sends our way. Five out of five stars.