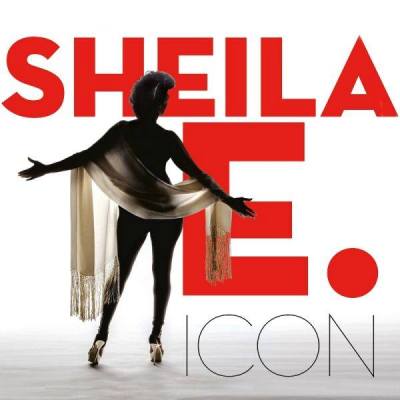 After a hiatus of more than a decade, multitalented veteran musician Sheila Escovedo –best known as Sheila E. – releases her latest album ICON via Moosicus, an independent label based in Germany.  Icon proves to be a captivating album showcasing Sheila E.’s tremendous musicianship and eclecticism at work, although its availability solely is an import in the U.S (as of yet).  Not married to one style of music throughout this 13-track effort, Sheila E. explores jazz, Latin, pop, R&B, and rock. Sheila’s artistic restlessness proves to be a gargantuan benefit to the listener; ICON rarely presents the uninteresting or mundane moment. While the wheel fails to be reinvented, the overall quality is top-notch.

A number of highlights shape Icon into the enjoyable, well-rounded listening experience that it is. Following a jubilant percussion interlude entitled “Butterfly”, “Mona Lisa” kicks things off exceptionally with its Latin-soul groove. Filled with a killer horn arrangement, a ‘dirty’ guitar solo, and guest vocals from Gisa Vatcky and Lucia Parker, “Mona Lisa” both aim and establishes the mark high. Follow-up “Lovely Day” continues to elevate that bar intact with a funky groove, thoughtful urban harmonic progression, and uplifting lyrics. “It’s gonna be a lovely day / no worries, no worries,” sings Sheila E. “…It’s gonna be a lovely day / I see clearly now that the rain is gone.” Later, on the infectious “Nasty Thang,” Sheila E. receives an assist from hip-hop vet MC Lyte, who proves to be the perfect collaborative match on the funk cut. As compelling as songwriting is, the music itself is a draw, contrasting the more pop-soul oriented tracks. “Nasty Thang” has the ‘70s in mind, but also has a ‘foot in the door’ of contemporary times without compromising Sheila’s artistry.

Other moments compel as well. Former partner in crime, music legend Prince appeared on the electrifying “Leader of the Band”. Prince composed the tune, in addition to lending his vocal and pianistic expertise. “Leader of the Band” also features Sheila E.’s family, namely Pete “Pops” Escovedo. “Girl Like Me” features the incredible pipes of Grammy-nominated R&B singer Ledisi, closing at quite a fever pitch with gritty vocal ad-libs. “Old Skool” indeed focuses on the past, but still sounds incredibly fresh within the current time frame. “Old Skool”, much like “Nasty Thang” and “Leader of the Band”, sports funkiness about it, also adding a dash of Latin-jazz influence. Track after track finds Sheila E. and various collaborators flexing their musical biceps.

Ultimately, ICON is an exceptional album through and through. In essence, it is an effort that shows Sheila E.’s ‘best of’ without relying on her hits to do so. With E.’s intent being to recollect her illustrious career through new music that can be shared with avid fans and new ones alike, she accomplishes this feat without a hitch. As aforementioned, Sheila E. doesn’t truly bring anything new to the table, but she also doesn’t need to. The quality and constant stylistic contrasts make ICON interesting enough without new ideas. Is Sheila E. a true ‘icon’? Of course, that’s rhetorical!