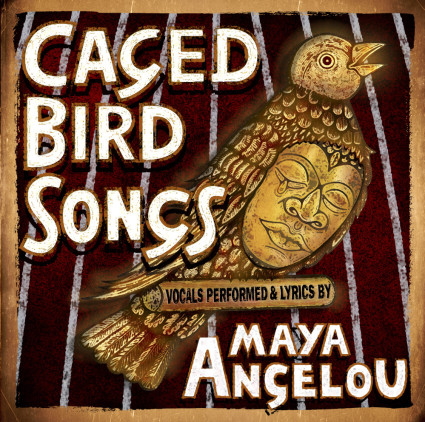 Unquestionably, Maya Angelou stands as one of the most influential poets for the human race. Graced with an extraordinary touch that could gently sway one minute and fiercely attack the next, Angelou (who passed in late May of 2014) championed for urban social injustices and other pressing issues with her mighty pen. Her autobiography, I Know Why the Caged Bird Sings, explores a number of areas that Angelou has been firmly passionate about, including literacy and racism. A portion of Angelou’s extensive poetry gems capturing the quintessence of her streetwise savvy comprise the seven year recorded investment, entitled Caged Bird Songs from Smooch Music and founder of Caged Bird Legacy, Colin A. Johnson, Dr. Angelous’ grandson. Caged Bird Songs features thirteen tracks, anchored by a soundtrack guided by producers Shawn Rivera (Az Yet) and RoccStarr (Rhianna, Usher) with a mix of Angelou’s previously recorded and newer vocal tracks covering a number of topics extremely relevant for this day and age. 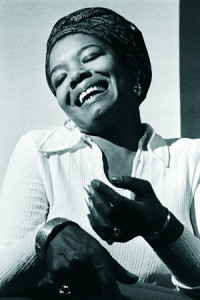 Angelou’s perspective on the differences between cultures is best expressed with the techno funk of “Human Family:” “We are more alike, my friends/Than we are unalike.” “On Aging,” riding on a cool hip-hop bed, reveals quite the sassy commentary on how senior citizens are the same people as always expecting no pity from anyone: “Don’t bring me no rockin’ chair.” Dubbed as a work song, the contemporary jazz grooves of “One More Round” points out those who toil through the day should not be mistreated by their bosses: “I was born/To work up to my grave/But I was not born/To be a slave.” Dedicated to the children, the encouraging “Life Doesn’t Frighten Me” is painted by the spot-on sound effects of animals, and the warm rhythms, cradling guitar and tasty piano fills. For the grown folks, “Come and Be My Baby” drops a fitting old school, edgy R&B ballad about the man’s secure and insecure romance moves. Highlighted by an energetic dance extravaganza video influenced by the playground game of hopscotch, Caged Bird Song’s first single, “Harlem Hopscotch,” fuels on Bollywood-like beats and an introspective statement on “hoppin”: “Food is gone/Rent is due/Cuss and cry/And then jump too.”

“Still I Rise” delivers an enjoyable exhilarating celebration of gospel with a resounding message of hope: “Bringing the gifts that my ancestors gave/I am the dream and the hope of the slave…I rise.” Finally, Angelou pats herself on the back for a body of work more than well done for “Pow Pow,” over the pounding snares: “I’m the best that ever done/It that’s my title and I won it.”

Where the production danger zone on Caged Bird Songs opens up is when the music starts to deter from the true star in Angelou’s spoken word. Two prime example are “Pickin ‘Em Up” that trips up with a lame hook and a flat rhythm track. While the rapid fire jazz shots throughout “Ain’t That Bad” compliment Angelou’s commentary on black culture regarding the family, the producers could have avoided excess electronic manipulation for the sake of the beats. That aside, the pros outweigh the cons as Caged Bird Songs successfully extends Angelou’s legend to future generations of her fans,