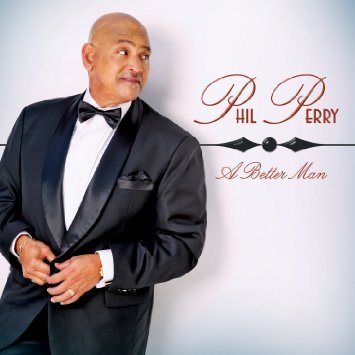 Phil Perry’s new CD is called A Better Man. This is more than a suitable title considering while some musical voices decline with age, Perry’s creamy tenor still glides through the elegant romantic ballads and almost anything that is handed to him or writes about. Whether he’s up front or in the background, his vocals have easily translated to several genres, as his partnerships has crossed over with Rod Stewart, Barbara Streisand, Josh Groban and with fellow contemporary jazz compatriots like George Duke and Fourplay. Though this distinguished singer/songwriter has earned the kudos of his peers, there were several interruptions down the road, including a six year self-imposed sabbatical and a health scare in 2009. Yet once those distractions were by the wayside, Perry never veered from his musical purpose to becoming an even better artist. A trusting relationship certainly does not hurt this cause, thanks to Perry’s surefire connection with producer/musician/songwriter since 2006, Chris ‘Big Dog’ Davis, a key figure who brought Perry out of his sabbatical. Since their partnership began, Perry has been a very busy man releasing a series of CD’s, all for Shanachie Records. A Better Man is the latest for the Perry/Davis team, and is on most counts a work of excellence.

While romance always has its place in Perry’s music, A Better Man extends to reflective moments of victories and letdowns, tributes to a particular musical hero and family members that have shaped his career on and off stage and a trip down memory lane. The heartfelt, groovin’ title track (including those nail-biting falsettos) is fairly self-explanatory in illustrating how to keep the gift of love alive: “I realize I see the light/Turn my wrong into right.” “Sorry I Let You Go” is a sincere soulful confessional on the regrets of a broken relationship. One of Perry’s inspirations growing up was Curtis Mayfield, who is well represented on A Better Man with two pieces; the more favorable being “Gypsy Woman,” where Perry’s jazz-tinged style never overshadows Mayfield and The Impression’s original version from 1961. Harkening to his early days with The Montclair’s in the seventies, Perry nicely recaptures “Dreaming’s Out of Season.” As for the steamy romance, there’s the first single, “Feelin’ You”, with very able assistance by smooth jazz veteran trumpeter Rick Braun. The only time A Better Man falls short is the motivational “Stand Up,” where the energy level is a bit lackluster, despite Howard Hewitt’s strong vocal turn.

It is a better thing on behalf of the adult contemporary jazz and soul lovers when Perry and Davis work it out in the studio and when Perry displays all of his vocal wares with confidence. A Better Man further marks another chapter in this artistically sound relationship that continues to get better. Four and three quarters out of Five stars.