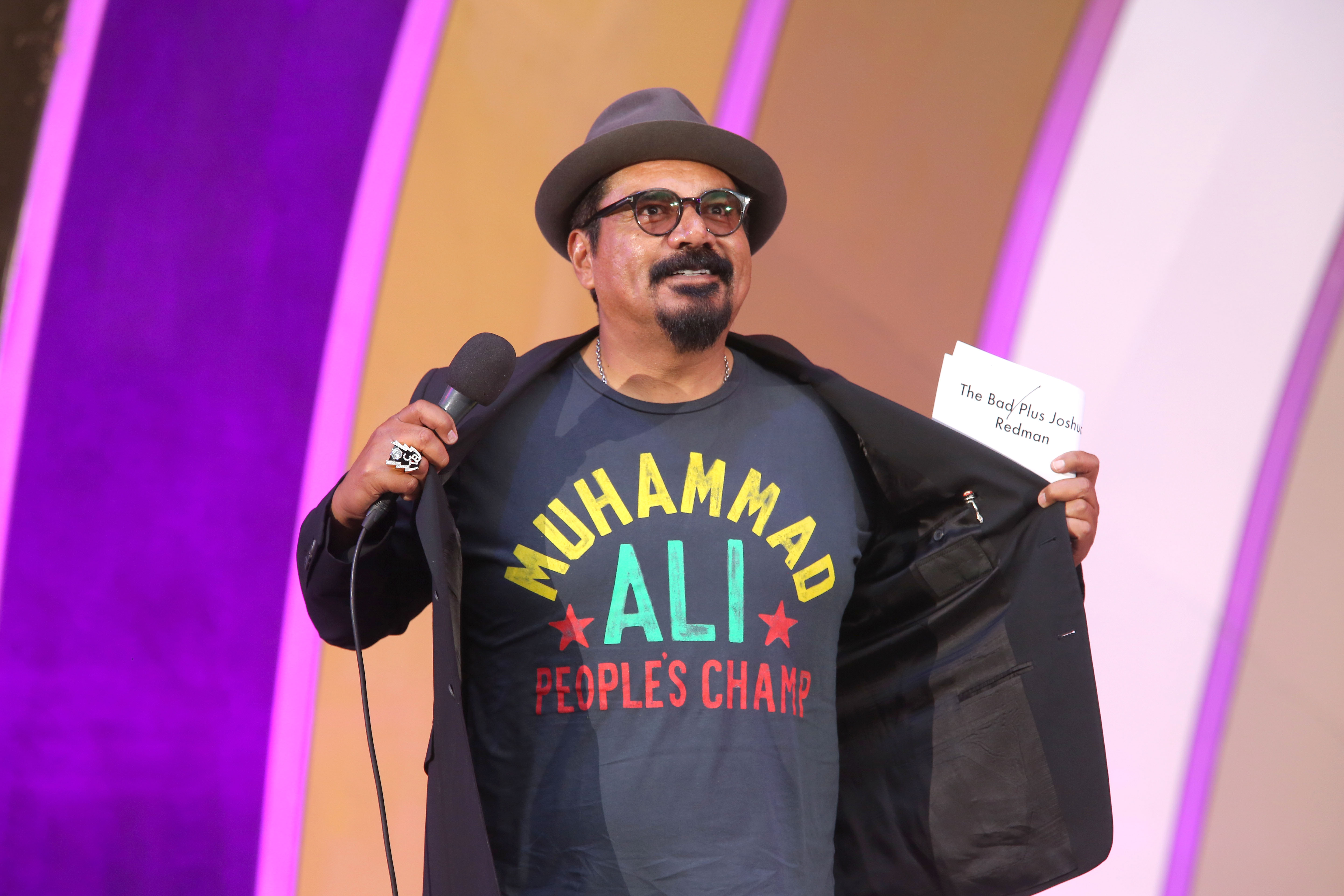 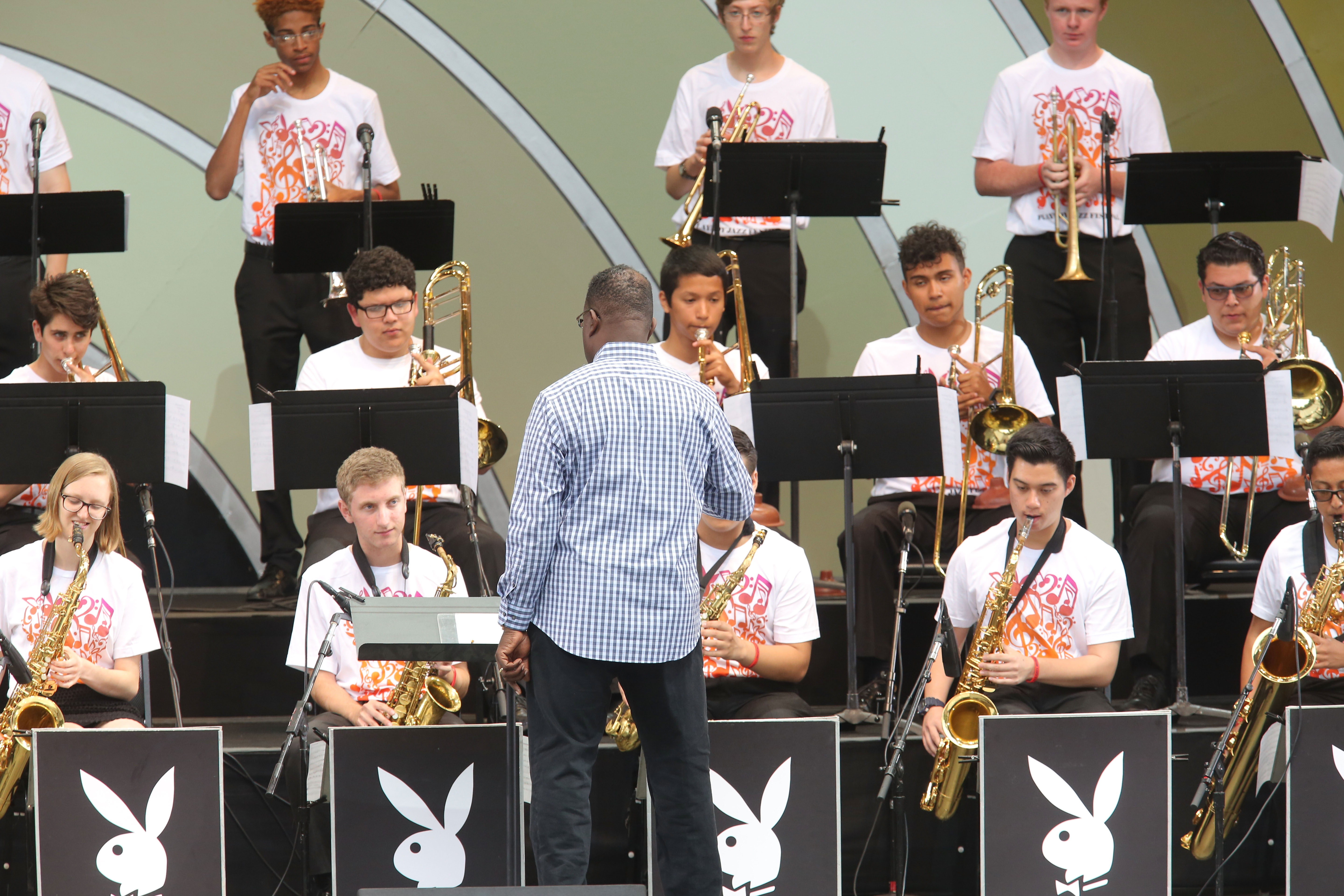 Singer-songwriter Aurelio Martinez brought Central American spirit to the Bowl specifically in the Garifuna tradition. His sextet supported him with grace and power as he showcased his skills as a singer (taught by his mother), drummer (taught by his uncles) and guitarist. Blending the sound from his small birthplace Caribbean island Plaplaya with those of Brazil and Africa, Aurelio blessed the Bowl with a sunny, life affirming performance. 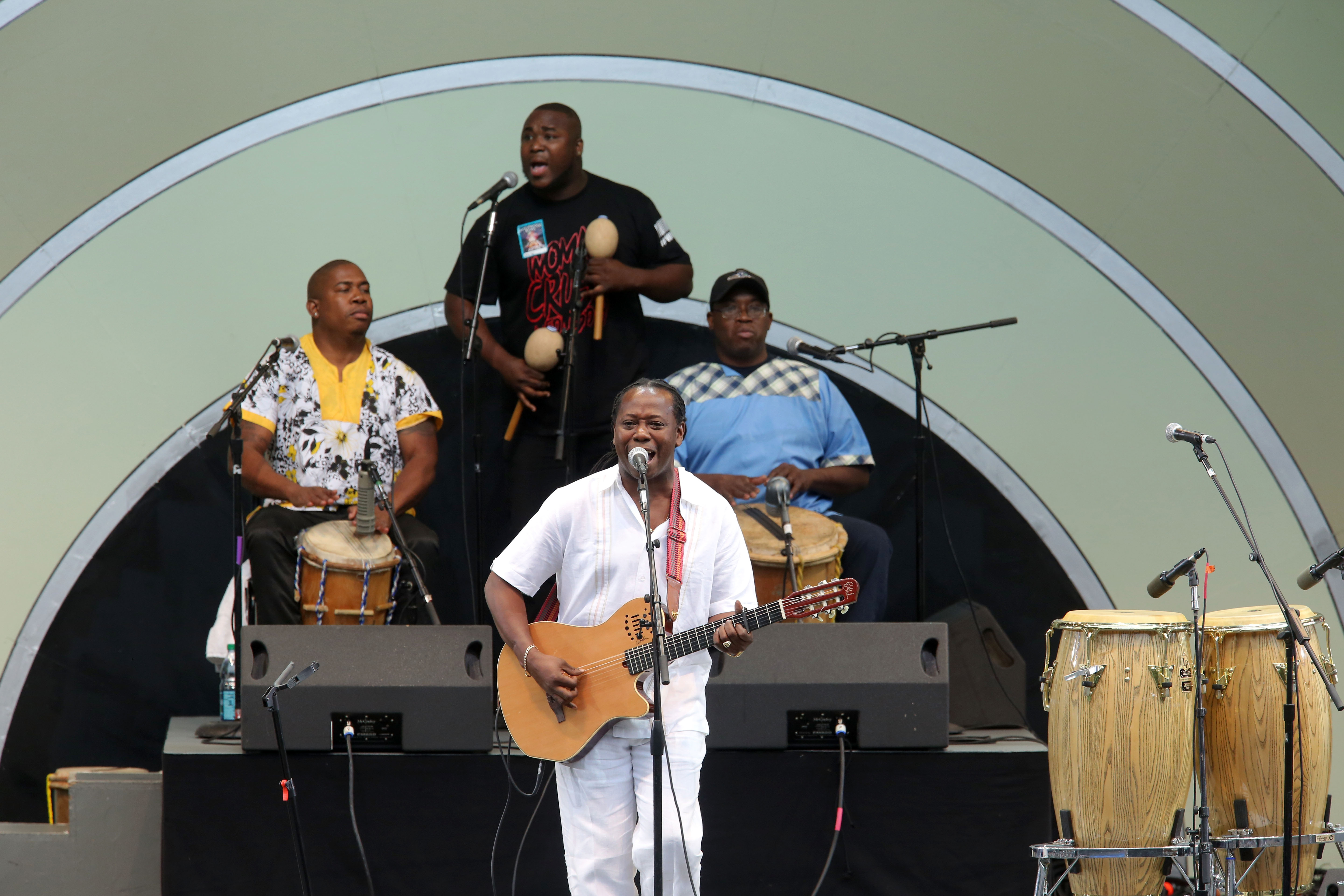 Keyboardist/Arranger/Composer/Producer John Beasley has been a powerhouse not only in jazz and rock music but also in Hollywood from “James Bond: Skyfall” to the upcoming animated feature “Finding Dory.” He has released several solo CDs but this August will unveil the first recorded volume of a special project he brought to the Bowl stage this year – the 16-piece ensemble Monk’estra – through which he flips the already flipped music of Thelonious Monk on its other ear! I’ve seen “Beas” preparing this ensemble for posterity by playing live locally twice before at the intimate Baked Potato and the outdoor Los Angeles County Museum of Art. They are to be commended for adventurous explorations of classics from “Evidence” to “Misterioso” with most evident daring. 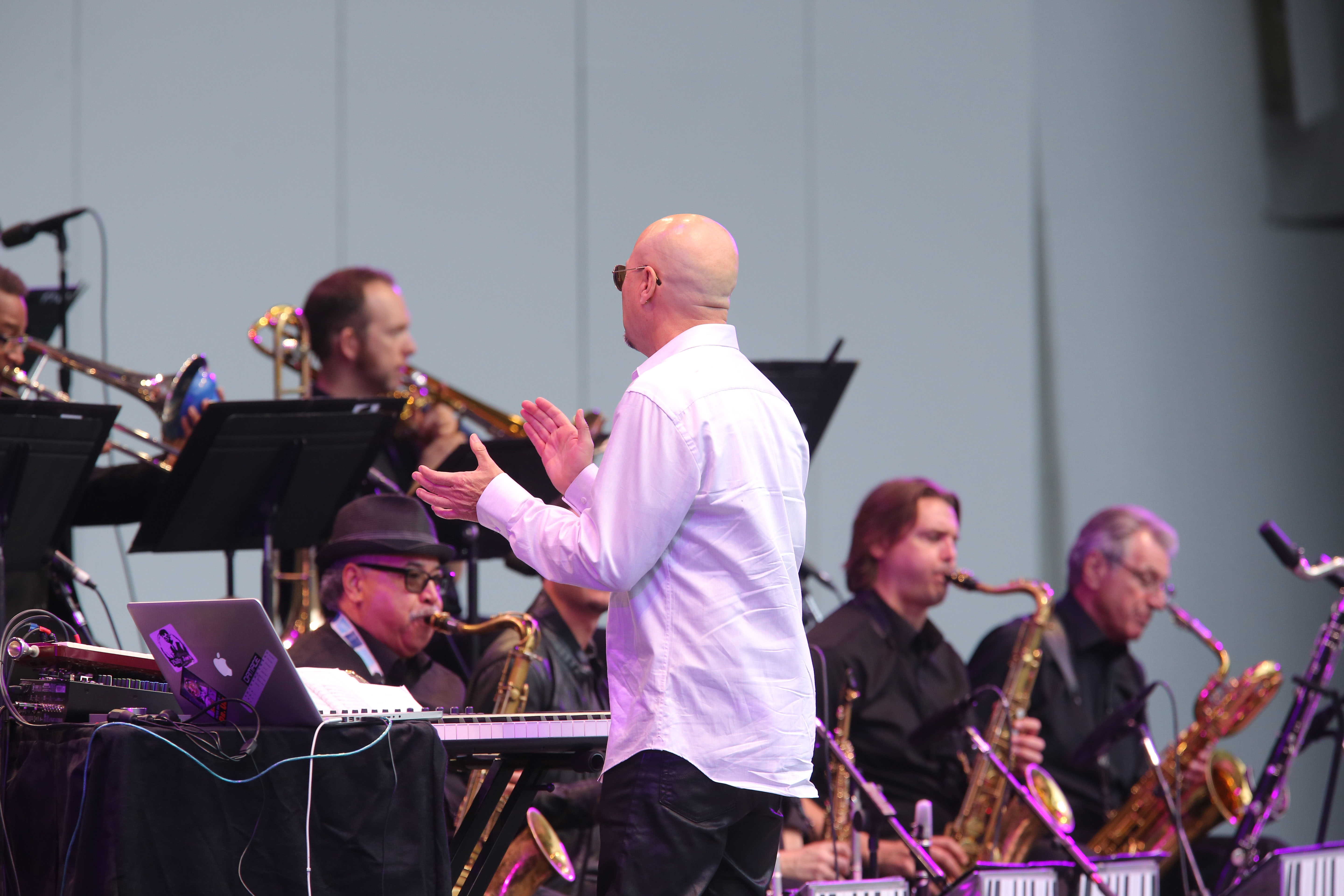 Day 1 of the festival was essentially stolen by Bali-born 12 year-old piano prodigy Joey Alexander leading his crack trio of Ulysses Owens, Jr. on drums and Dan Chmielinski on upright bass. Already profiled on “60 Minutes,” this young man earned an extended standing ovation following his highly impressive renditions of John Coltrane’s “Resolution” (from A Love Supreme) and “Giant Steps” followed by a solo piano piece and Monk’s “I Mean You.” Joey represents the future and we appreciate what he is taking away from simpler boyhood joys to take it seriously. The line at his post-set CD signing suggests he is on the right track. 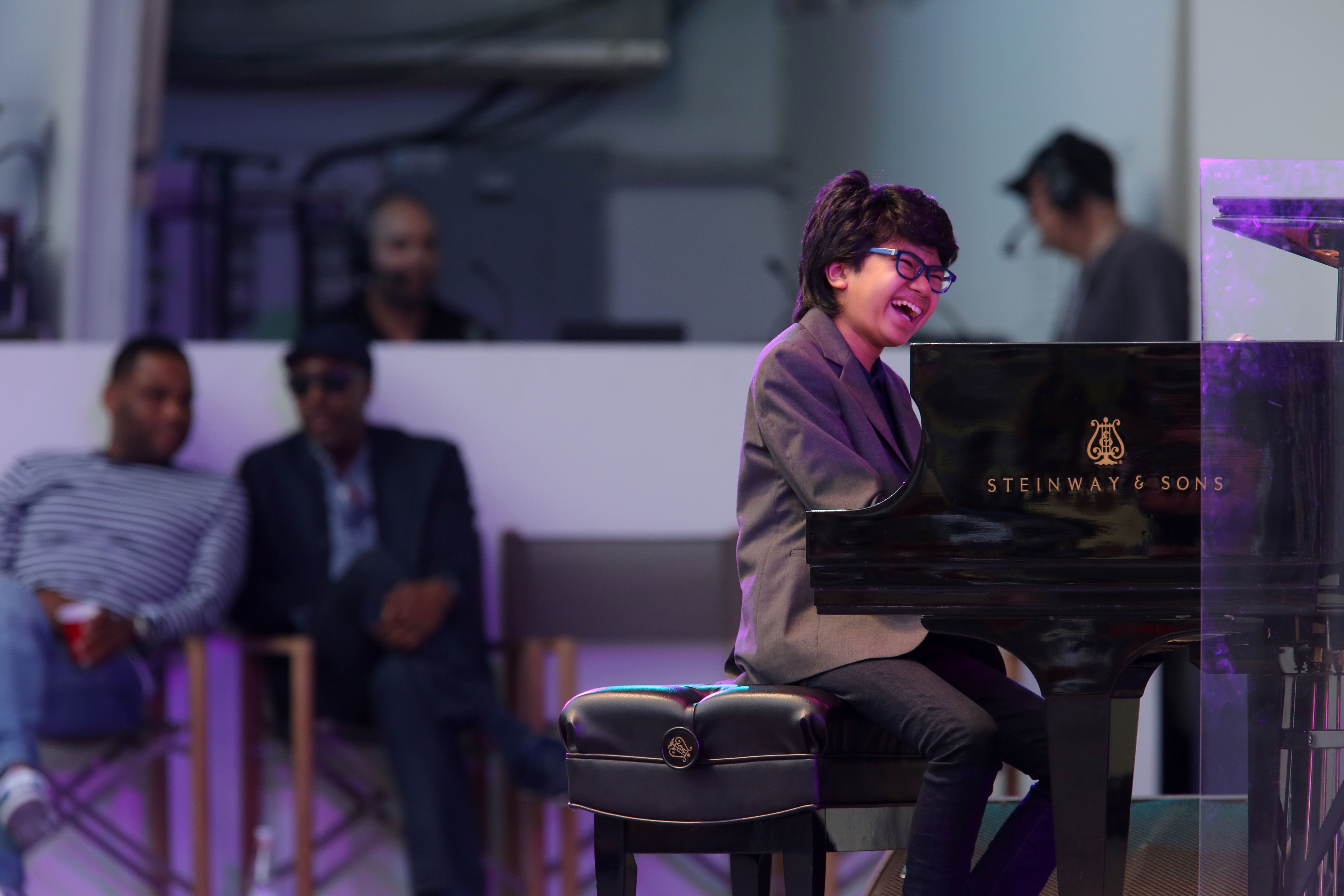 Joey Alexander with Arsenio Hall and friend looking on

Cecile McLorin Salvant, a singer of French-Haitian descent born in Miami who chose to do her advance studies in Aix-en Provence in the South of France, brought a depth and flair to her eclectic repertoire that found her as colorfully embodying the character and storylines of the material as her afternoon garments covered her figure. From the classic blues about a dysfunctional bed partner “What’s the Matter Baby” (what a Viagra-plug of an opener for a Playboy concert) and an ironically witty turn on Bacharach & David’s oft-thought sexist “Wives and Lovers” to the playful Bob Dorough number “I’ve Got Just About Everything,” she brought engaging life to the songs with both studied dignity and womanly wile. 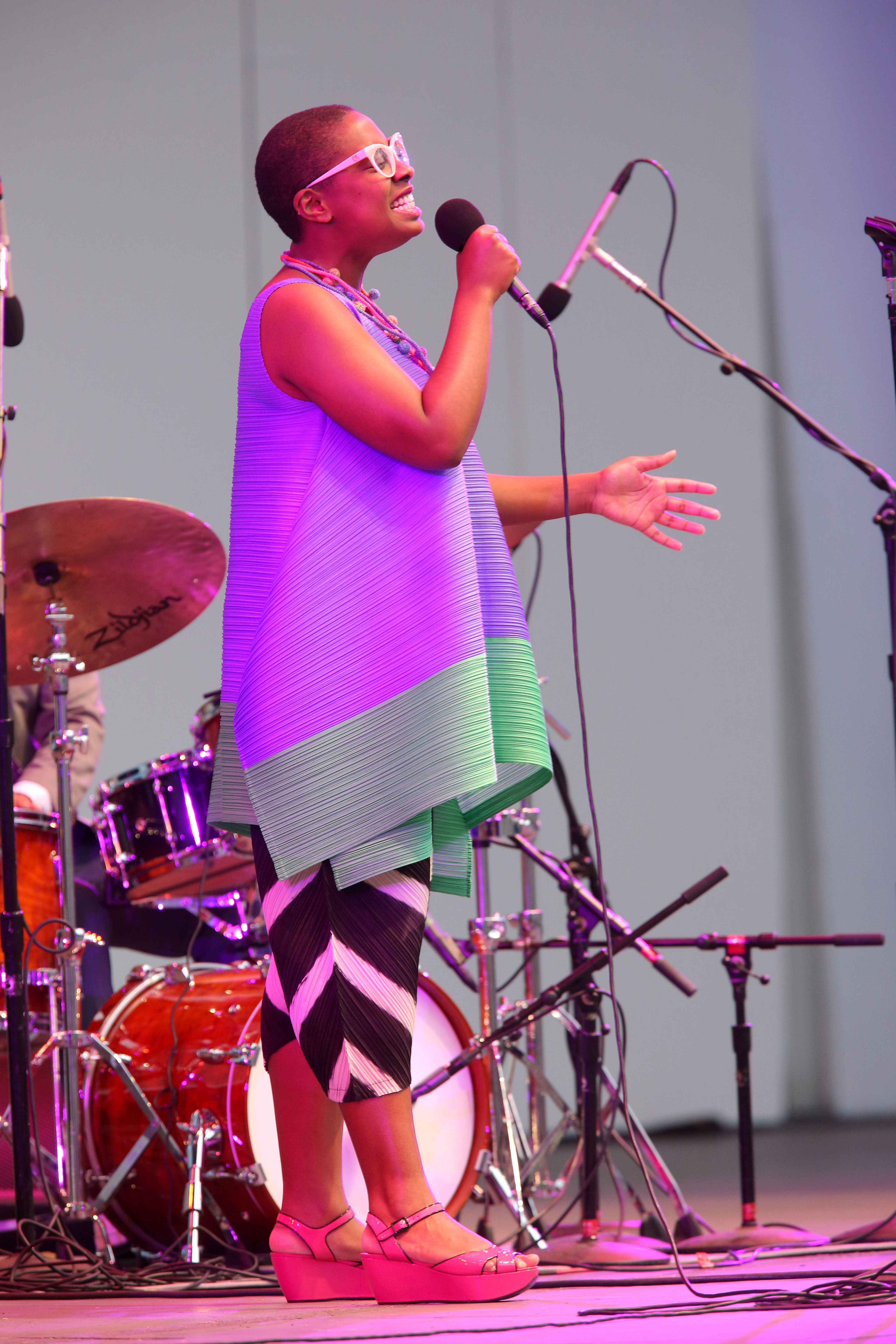 Rule-breaking/genre-bending trio The Bad Plus with special guest Joshua Redman on tenor sax was the stretch jazz band of the day, exclusively showcasing original material from the pairing’s eponymous 2015 collaboration CD. Playing compositions by each of the four musicians, they moved from the angular opener “As This Moment Slips Away” and “Faith through Error” to the introspective “Lack the Faith but Not the Wine” and stately closer “Beauty Has It Hard,” each theme of the titles wrought with eloquence and high-pitched emotion. 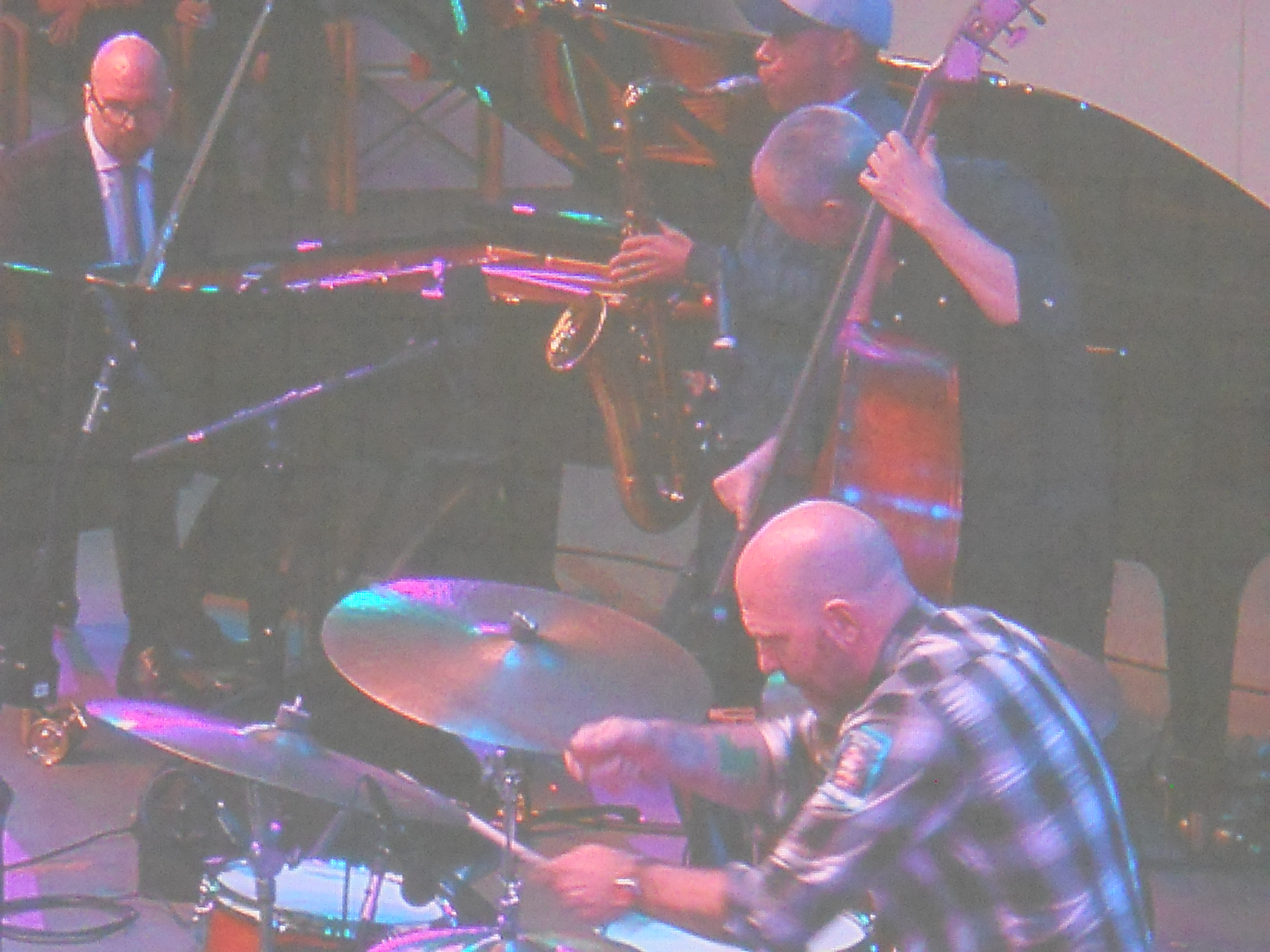 The Bad Plus & Joshua Redman (Photo: A. Scott Galloway)

The vocal septet Naturally 7 – which I describe as Take 6 to the 5th Dimension – made a return visit to the festival shrewdly choosing to wow the crowd with their unique “voices as musical instruments” presentation within choice comfortably familiar songs. Opening with Phil Collins’ mighty “In the Air Tonight” and Seals & Crofts’ timeless “Summer Breeze,” they made a big impression with a histrionic jam on George Harrison’s “While My Guitar Gently weeps” during which 1st tenor Ricky Cort belted out a center stage on his knees solo in the sound of an electric guitar that made the hairs on your arms stand up. A gentle reggae medley of “By the Rivers of Babylon” and “Redemption Song” led into a sing-a-long of Sting’s “Englishman in New York.” Bowing to living jazz legend Herbie Hancock, they next performed a medley of the keyboard wizard’s sonically ear-bending classics “Watermelon Man (`73),” “Chameleon” and “Rockit,” then ended with Coldplay’s rock anthem “Fix You.” While record sales for these eclectic game-changers have been a challenge, they are always dynamic contenders in concert. 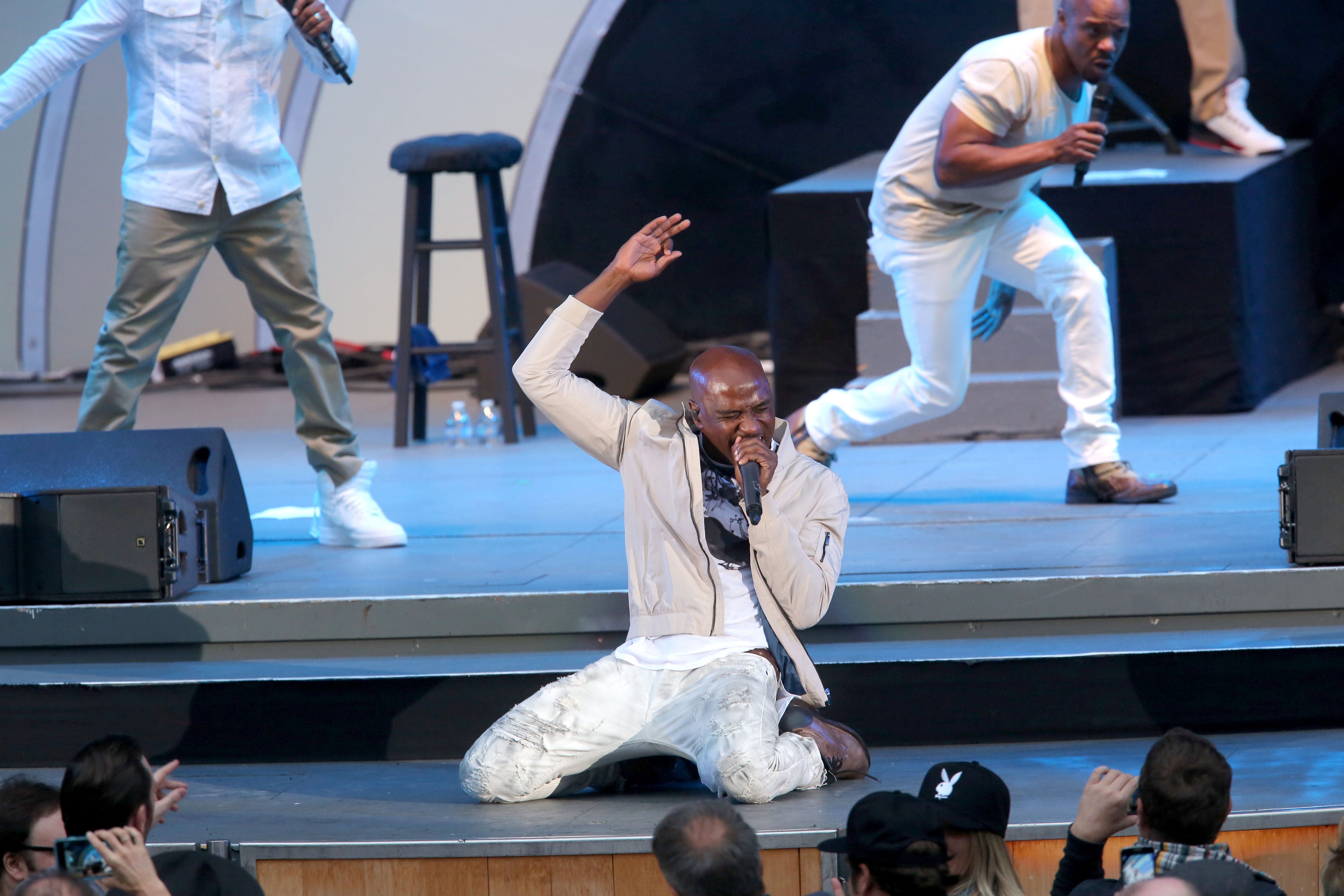 Emmy-winner Seth MacFarlane came to prominence as a success in prime time animation via the outrageous hit series “Family Guy” but has been making a splash as a Traditional Pop singer with three music CDs, the latest of which, the 17-song No One Ever Tells You, topped the Billboard Jazz chart and earned him his third Grammy nomination. As the stage spun around just after sunset to reveal him with an 18-piece band under the direction of Joel McNeely, the emphasis was on nostalgia-drenched songs of love lost & love found from the `50s & `60s. Though no Sinatra, MacFarlane is living the dream in fully detailed splendor. 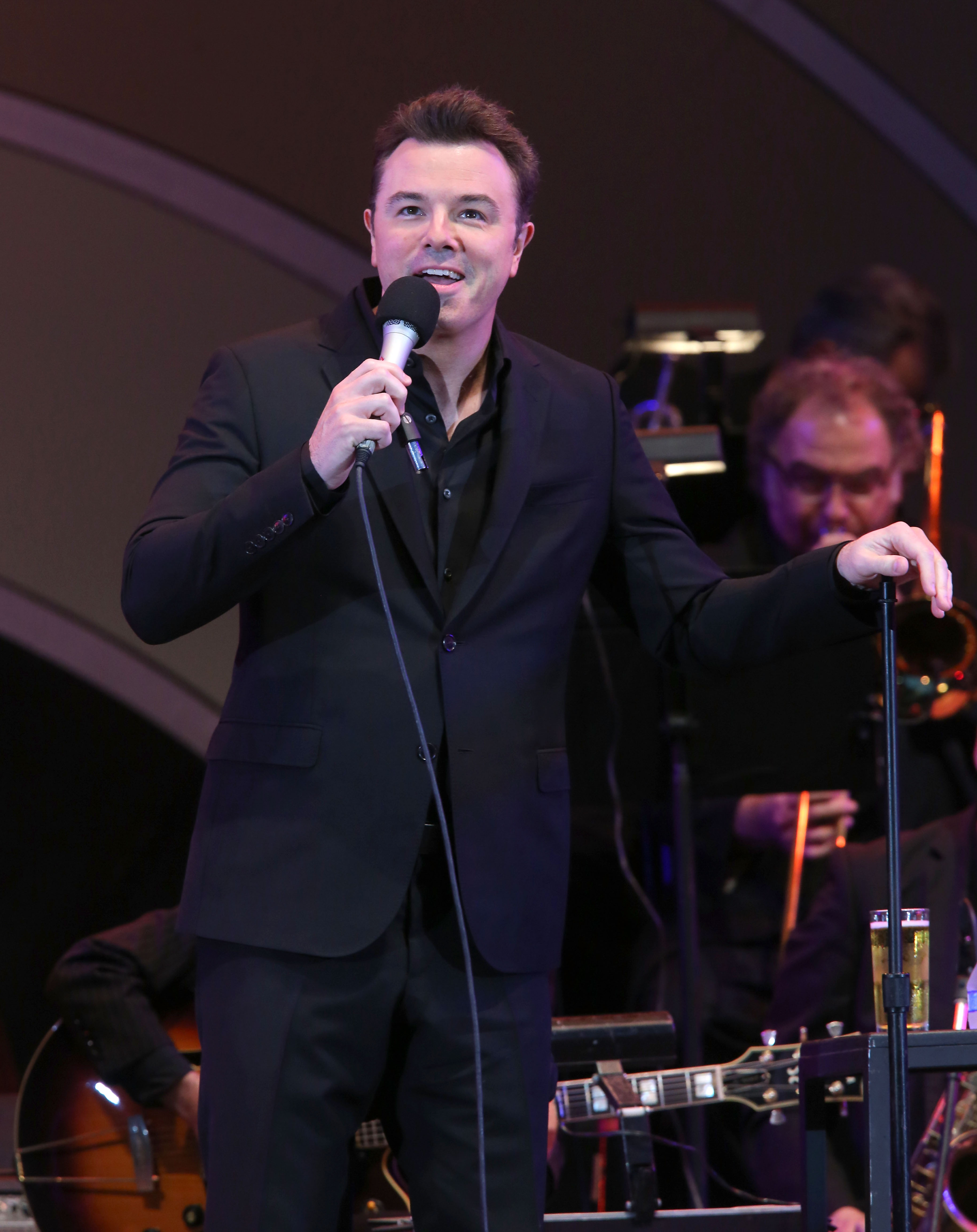 Cuba’s Los Van Van band brought a crowd that was now fully ready to party to its feet with its signature fusion of “son’ and “go-go” music that is dubbed “songo.” With brothers drummer Samuel Formell Alfonso and bassist Juan Carlos Formell Alfonso propelling everything from the back and frontline singers Abdel Rasalps Sotolongo, Yenisef Valdes Fuentes, Roberto Hernandez Acea and Armando Abreu rocking the party in the spotlight, the tirelessly world-touring band made believers, dancers and conga-liners out of the crowd, even dipping into Weather Report’s “Birdland” inside their driving mélange of groove. 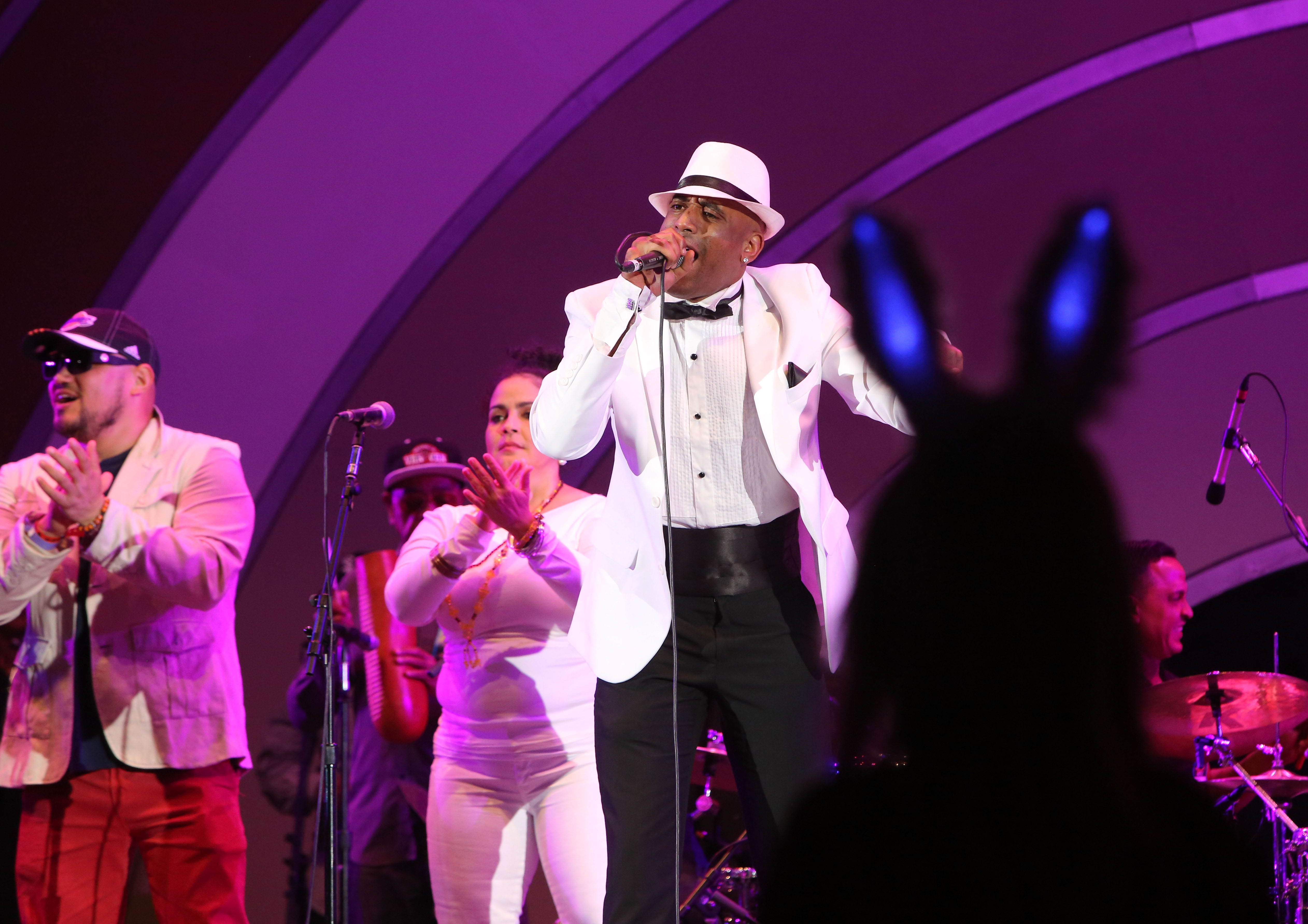 Saturday closed curiously with Jon Batiste & Stay Human’s Soul-driven set. They opened matching Los Van Van’s energy with a perfect segue, but lost the plot in overlong jams that came off woefully impromptu. They paraded through the audience in an attempt at a Mardi Gras free for all as if in Batiste’s native New Orleans but save for Grace Kelly playing both alto and baritone saxes, no other soloist (or song) stood out. One might argue, “By that time of night, who cares?” But from someone who is MD of TV’s “Late Show with Stephen Colbert,” others would expect more respect for those that stay up with you to the very end. 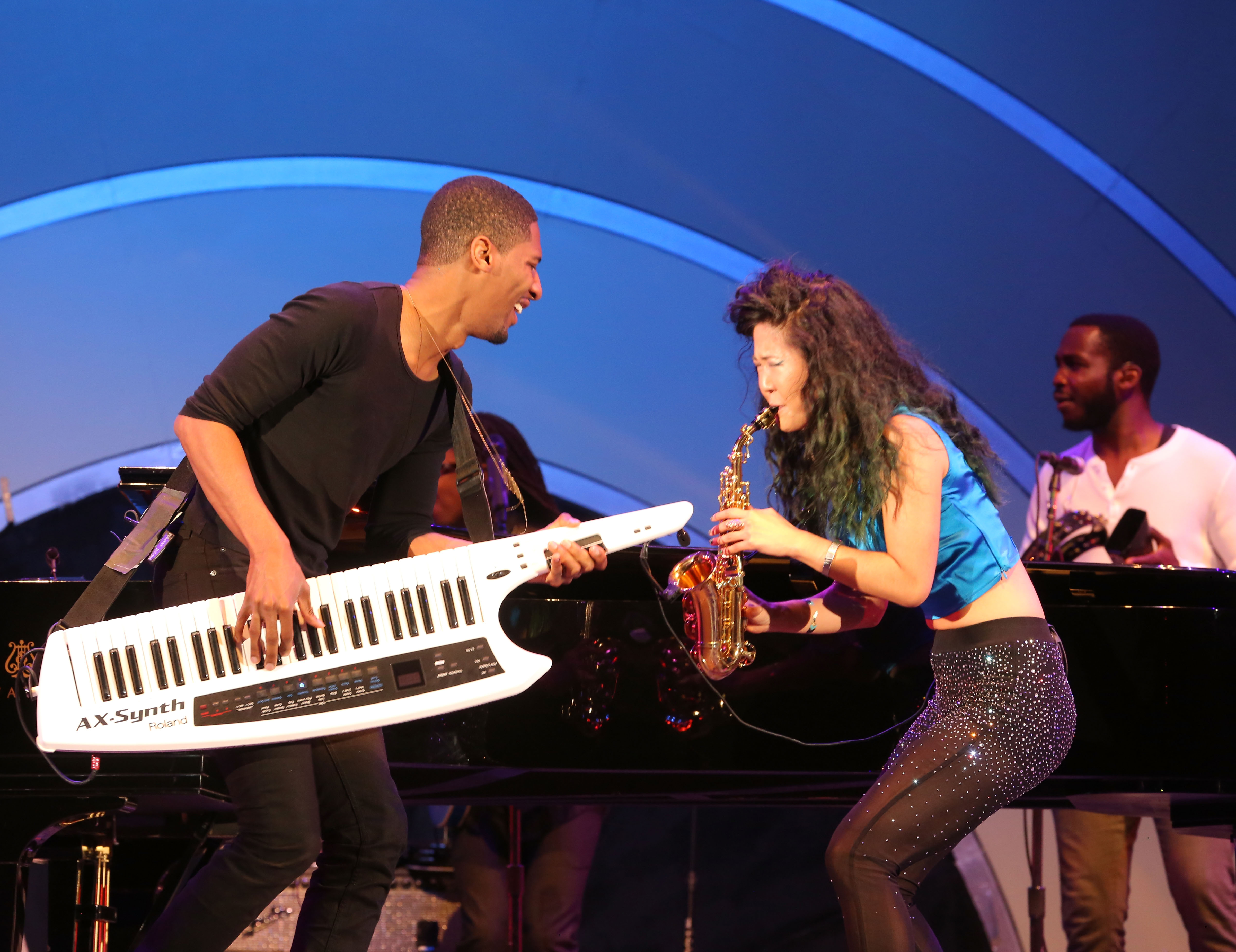 Coverage of Sunday’s Playboy Jazz Festival can be read by clicking here: 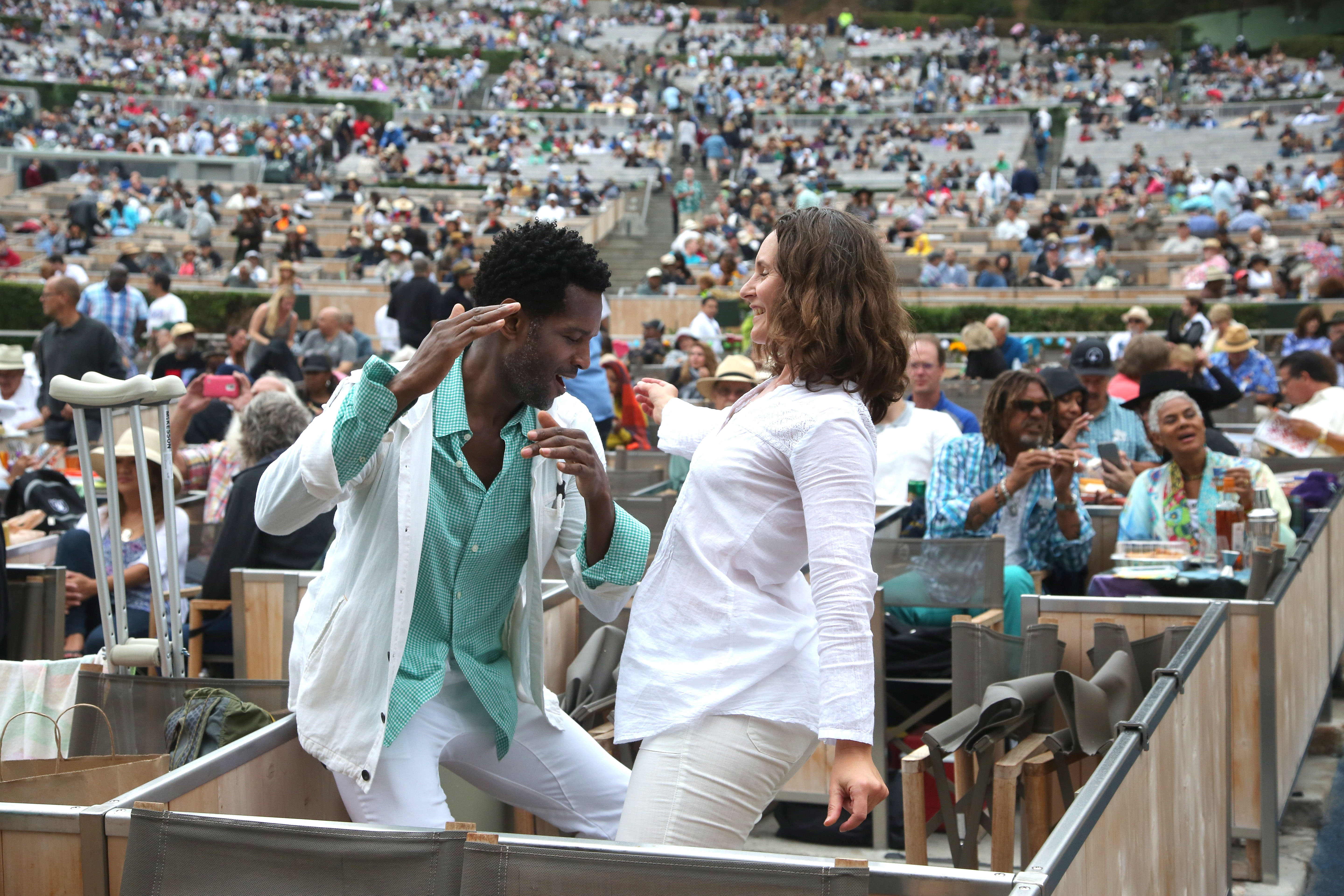 Playboy couple getting into the groove

Read Review for Day 2 of the 38th Playboy Jazz Festival by clicking HERE!