Day 2 of the 38th “Playboy Jazz Festival” at the Hollywood Bowl was by far the more star-studded and highly anticipated of the weekend. Not only that, the cross section of artists provided a near-perfect representation of all the music that appropriately falls under the cornucopia of the art form – from New Orleans roots, Blues and Big Band to Latin, Funk-Rock, Contemporary and Ancient-Future takes. 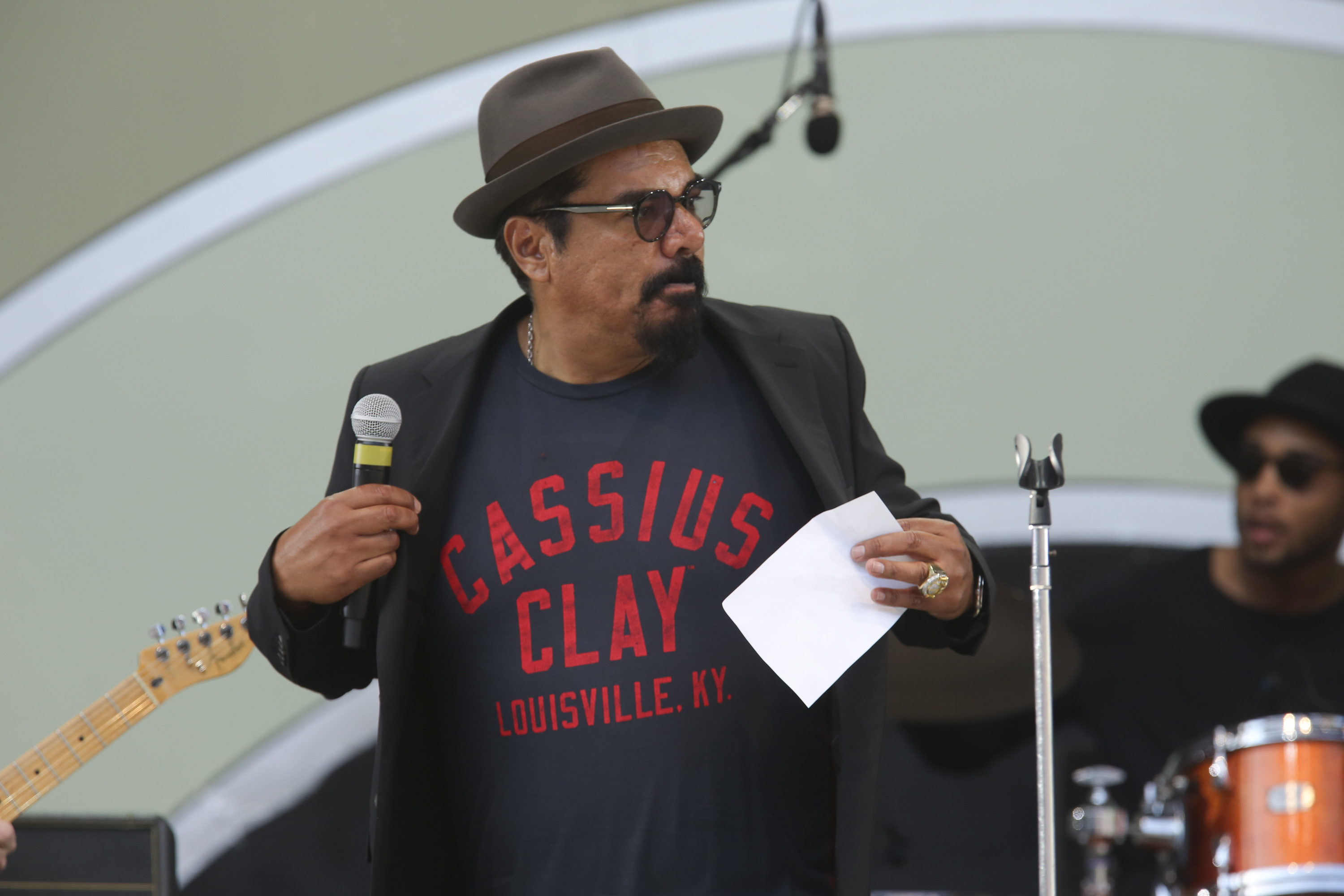 Once again, I cannot overstate how pleased I have become with host George Lopez who is attentive and playfully enthusiastic from start to finish, showing each artist due respect while getting in occasional digs of humor that are welcome and in no way intrusive or encroaching upon to the music we all came to enjoy. I hope he intends to hold onto this one of his MANY jobs for as long as he likes. 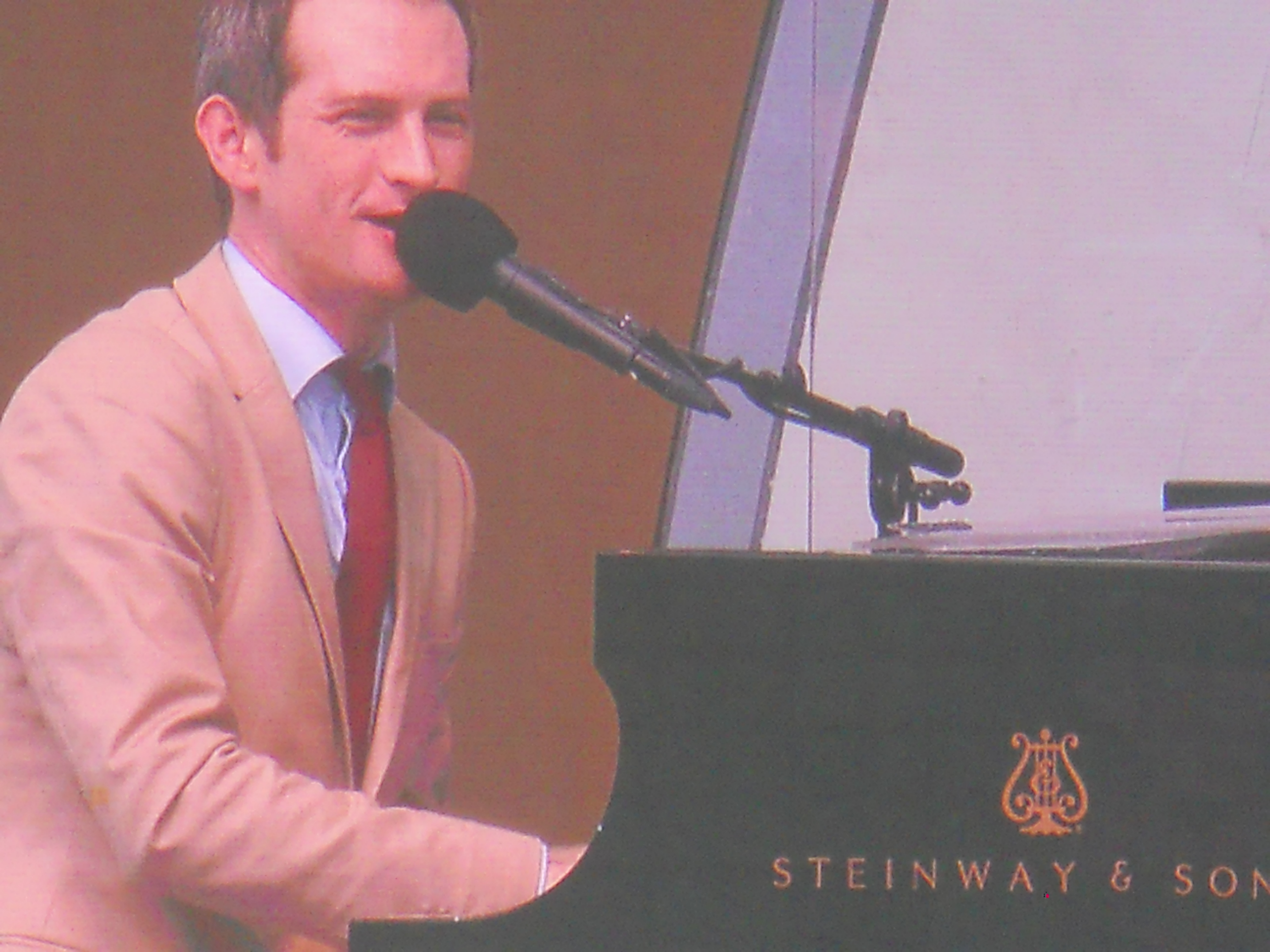 The first artist up was the Cal State University Northridge ‘A’ Band, always among the Southland’s finest as an ensemble and support unit. Its featured guest artist this year was English gent Anthony Strong who brought a delightfully broad cross-section of songs to the table stemming from his personal collection of vinyl. With frequent burst of charming personality, he amiably sailed through hip arrangements of Stevie Wonder’s “Higher Ground,” the humorous “Gamblin’ Man’s Blues” and the standard “Cheek to Cheek,” setting the tone for a great day. 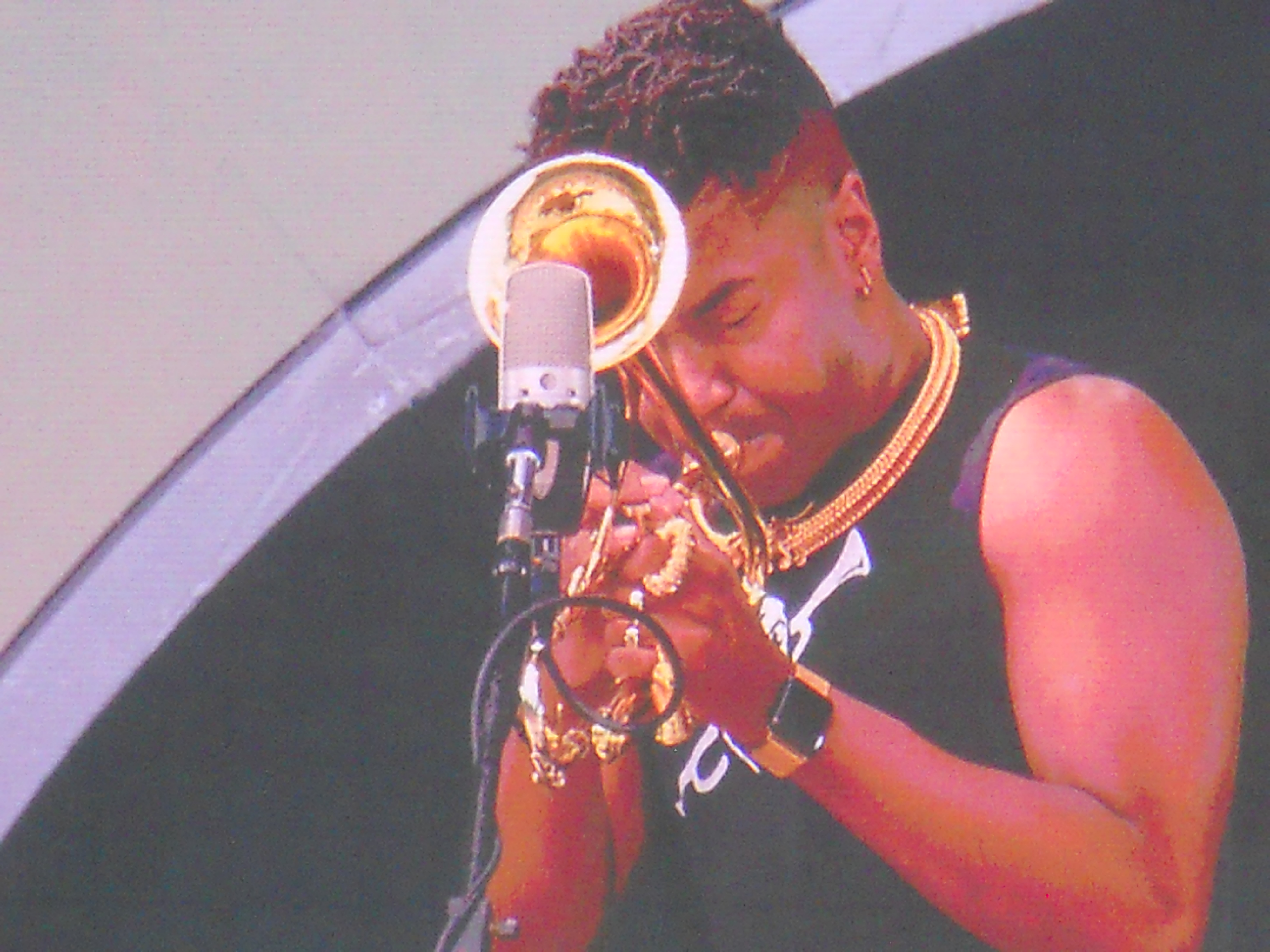 As on Saturday, the jazz knockout artist of the day arrived early with trumpeter Christian Scott Atunde Adjuah’s mind-blowing 7-piece group Stretch Music. Their mission appears to be to resuscitate jazz’s pulse with firm roots in its African American tradition then into the future with innovative twists from instrumentation to presentation. His group included two drummers – one playing a traditional kit and the other a custom West African-influenced set that Scott designed with its player Joe Dyson. Christian himself plays two self-created instruments – the reverse Flugelhorn and sirenette – in addition to trumpet. And he was joined upfront by 21 year-old flautist (and academic president) Elena Pinderhughes. Christian seemed to be giving directions before each number (no titles given for most) which resulted in a couple of pregnant pauses between tunes, but he made up for it with some of the most detailed and glowing introductions of each player I have ever heard in a concert setting. The closer, “Big Chief,” was dedicated to the patriarchs of his lineage: Grandfather Donald Harrison Sr. and uncle Donald Harrison Jr. Collectively, the music in this set was thick with culture, heritage and future purpose. 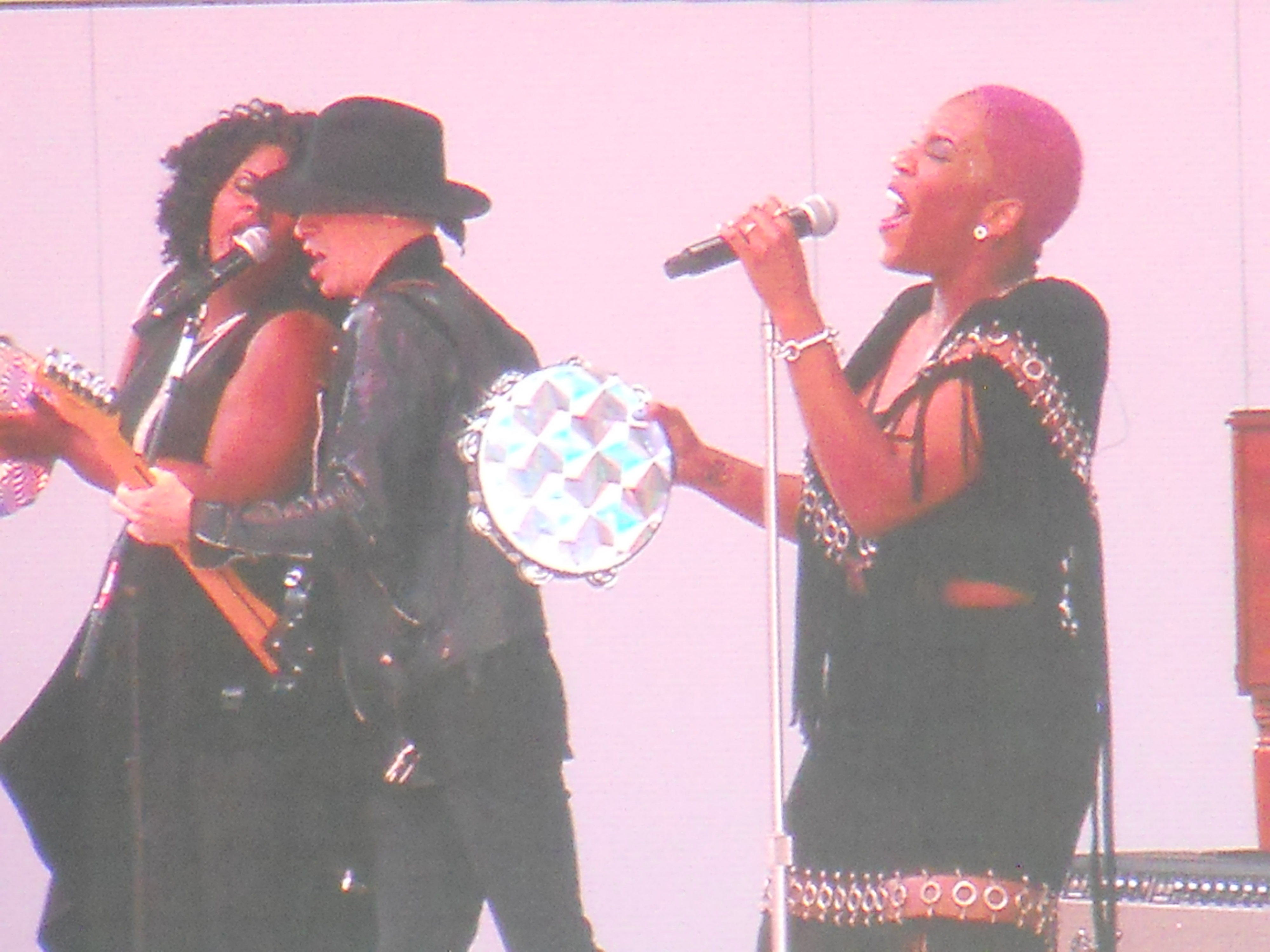 If Christian was the Jazz highlight of the day, electrifying singer/songwriter Liv Warfield and her band took the prize for everything else with a Funk-Rock set that was a shock to the senses you’d more expect to see at Woodstock. Galvanizing and riveting, Liv wrested your attention to hostage status as she wailed through cathartic selections from her second album The Unexpected and a forthcoming as-yet-untitled EP. A longtime backup singer for Prince, her previous Hollywood Bowl appearance was two nights last year opening for lady-led rock band Heart. Generously sharing her frontline with guitarist Ryan Waters (a disciple of Stevie Ray Vaughan from his look to his sound), searing sax man Keith Anderson and support vocalist “A.J.,” Liv left a giant piece of her heart on that stage – sending soul hollers to the sky on her knees, coming out of her shoes and working the arena for all she was worth. As they closed out with the one-two punch of Buddy Miles’ “Them Changes” and the original “Why Do You Lie,” Liv and her band kept on rockin’ until their side of the stage came to a complete stop on the other side of the wall. The audience never knew what hit `em…but it will. Trust and believe you will be seeing and hearing more from this woman very soon. 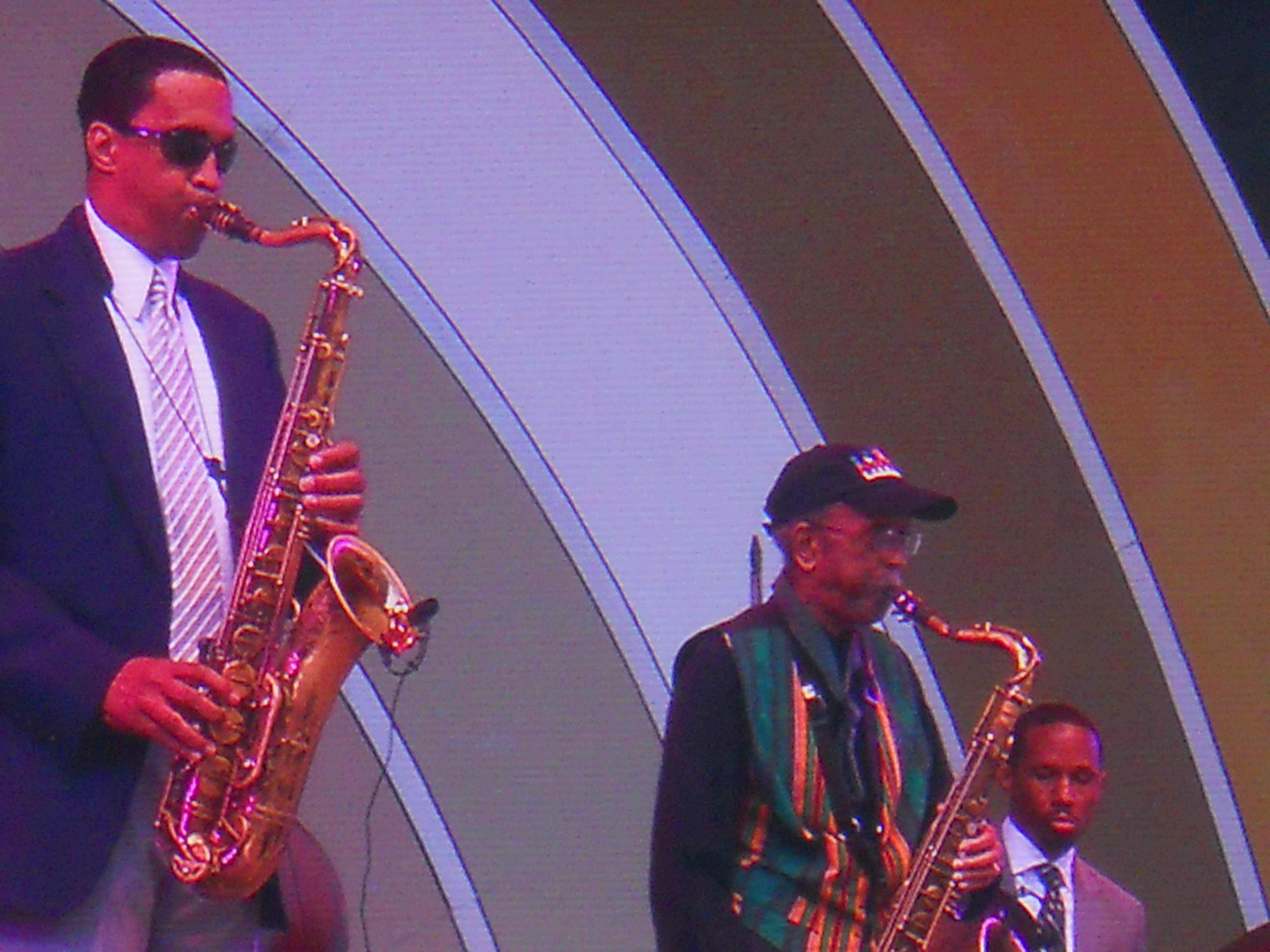 Sax Appeal brought a cooling reprieve of straight ahead jazz placing the peppery staccato playing of Javon Jackson against the languid legato sound of his mentor/ living legend Jimmy Heath as supported by the stellar group of criminally underrated George Cables on piano, David Williams on bass and local hero William Jones III on drums. Celebrating the legacy of the saxophone in jazz with both classics and originals, they dug right in from Charlie Parker’s “Confirmation” to a beautiful showcase for Heath on soprano sax entitled “Daydream.” 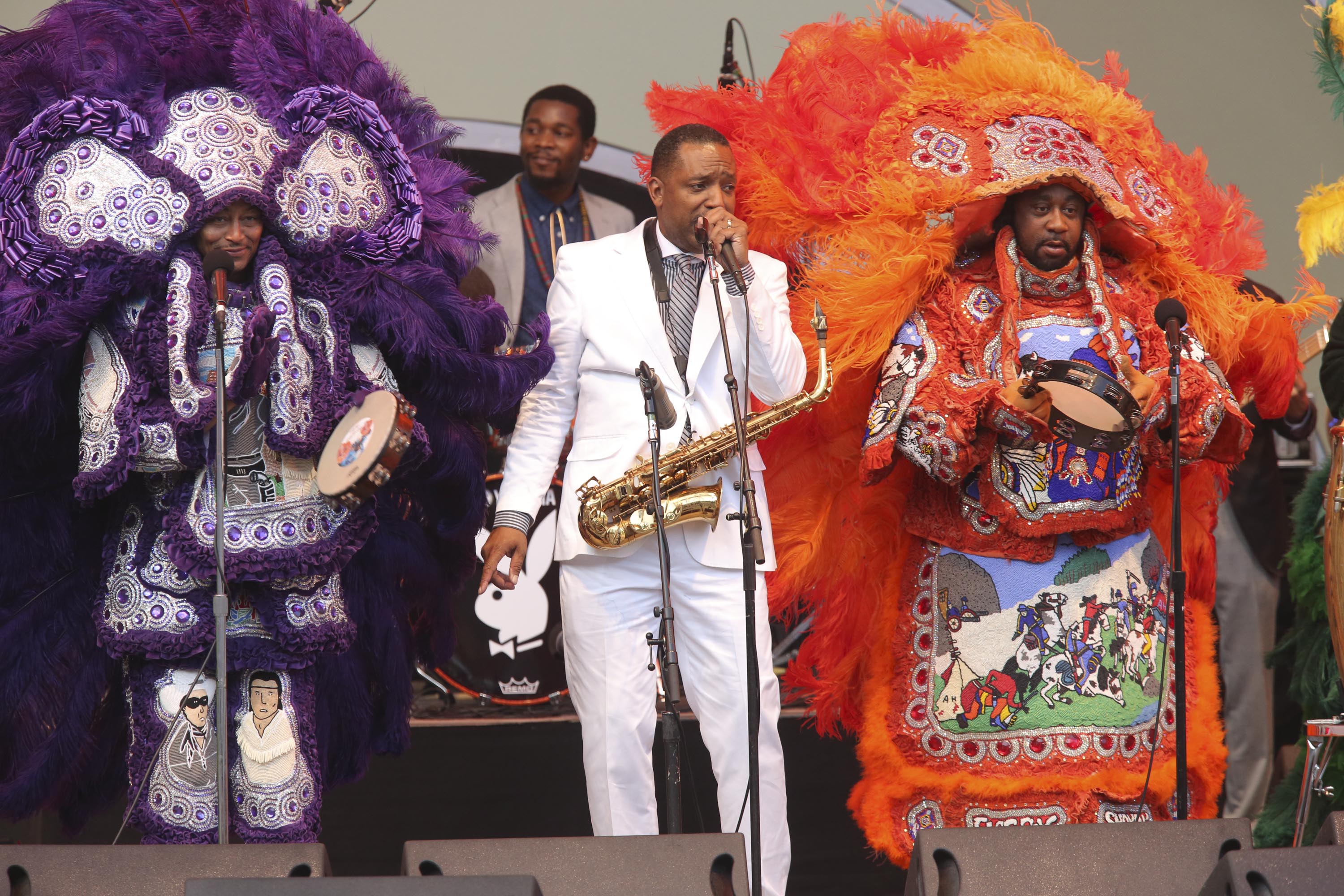 More colorful tradition followed as Christian Scott’s uncle saxophonist/vocalist Donald Harrison Jr. shared with the Bowl audience indigenous cultural sights and sounds handed down from his father with far-ranging influences on dance, style, R&B, even Hip Hop. The spirit of Congo Square in New Orleans sprang to life in their presentation filled with ensemble vamps, call and response vocal challenges, vibrant solos and an overall vibration of jubilation. 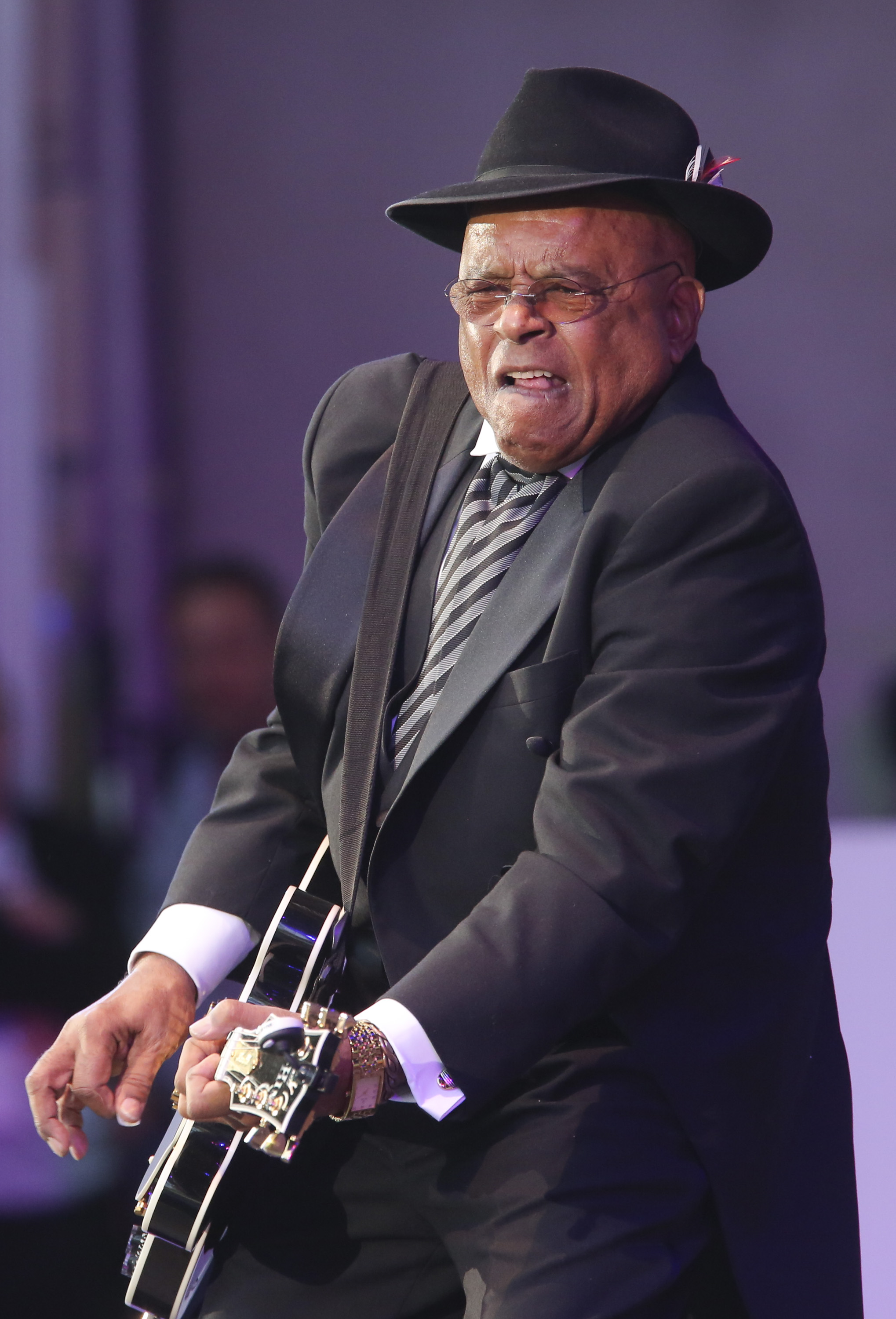 The Blues and its greatest sadly departed ambassador B.B. King were celebrated in a strong set conceived and led by gentleman of the Blues Robert Cray (who sang his sexy smooth hit “Shiver All Over”). This set also featured two special guests that couldn’t have been more different. Sonny Landreth who came up in Lafayette, Louisiana is a rootsier player who has worked as a sideman and is like a quiet mad scientist of the music. At the other end of the spectrum is Houston-born Roy Gaines, a master showman out of the T-Bone Walker school who performs in a signature black hat, stalks the stage and even plays his guitar behind his head. Together with a crack band, they saluted “The King of The Blues” with predictable but no less satisfying runs through “Rock Me Baby,” “How Blue Can You Get,” “Every Day I Have The Blues” and, for a big finish, “The Thrill Is Gone” on which they all shared guitar and vocal duties. 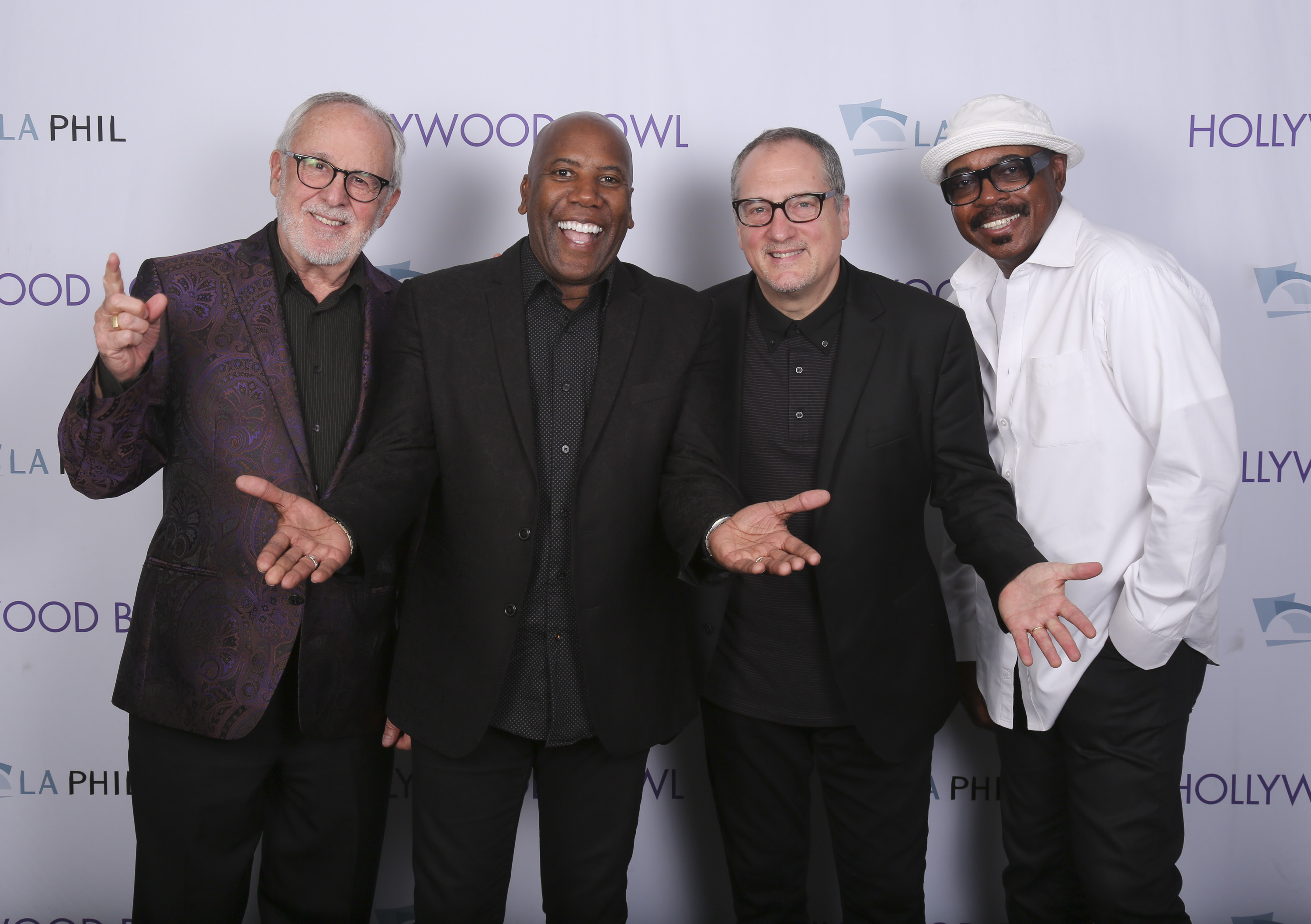 Contemporary Jazz super group Fourplay (bassist Nathan East, keyboardist Bob James, drummer Harvey Mason and guitarist Chuck Loeb) has played this festival many times in its three shifting incarnations of guitarists. Celebrating its 25th anniversary with a headlining set, the quartet served the audience some of its greatest radio-friendly hits (“Chant,” “101 Eastbound” and “Bali Run”) as well as new songs from their 13th and latest anniversary themed CD, Silver. Particularly sweet at sunset was Bob James’ “Gentle Giant” in tribute to the great jazz pianist Hank Jones, “Silverado” (penned by Loeb and his predecessor Larry Carlton) and James’ “Westchester Lady” which original guitarist Lee Ritenour refashioned as “Play Lady Play” that the band passed around like a hot potato for a fiery finale. 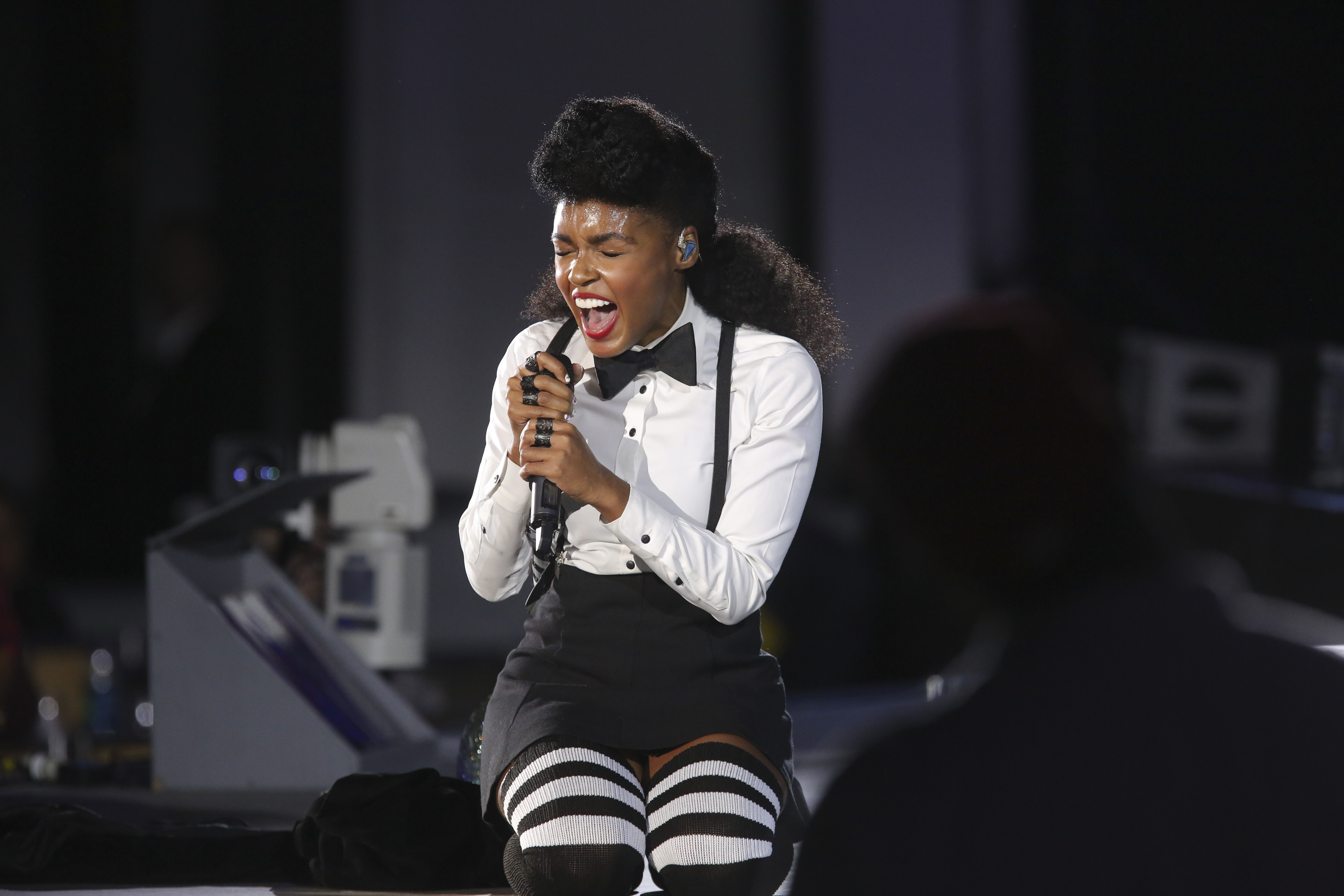 Pint-sized Atlanta Soul Mama Janelle Monae was wheeled to the stage on a dolly, propped upright at center stage upon which time she became a Dancing Machine all night long with no need for winding! Initial sound problems did not detract from openers “Give You What You Love,” “Smash-Smash” and “Electric Ladies” (the latter borrowing a little from the play book of Sly Stone). Her colorful high energy set only came to a pause one poignant time when she expressed her pain and solidarity with the largely gay victims of the Orlando massacre from the night before, calling for pride, love and respect for the LGBT community wherever they may walk. The party continued with vibrant salutes to singing/dancing sensations The Jackson 5 (“I Want You Back”) and James Brown (“I Feel Good”) before she launched into her own contribution to the canon, “Tightrope.” Monae closed her performance bathed in purple light singing Prince’s “Let’s Go Crazy,” dedicating it to the gone-too-soon “greatest rock star of all time” then was whisked off the stage with the song’s closing words, “TAKE ME AWAY!” (Note: Monae. her band and dancers were the only artists to enter and exit from the wings, never staying on for the traditional spinning of the stage.) 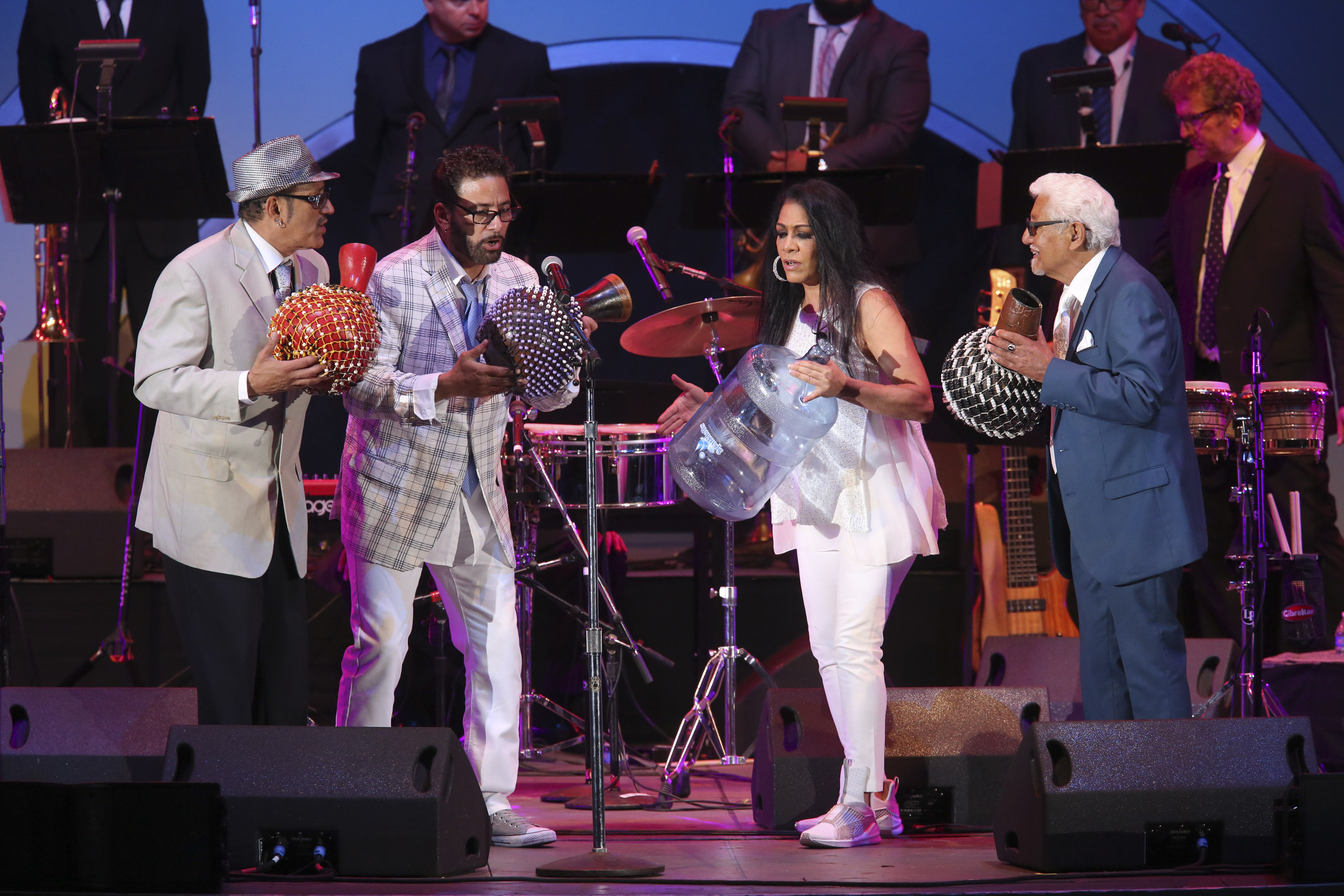 Closing out the festival was The Pete Escovedo Orchestra featuring his children Peter-Michael, Juan and Sheila E, guaranteeing that most of the audience would not be bailing for their cars until the show came to a complete stop. The Escovedos are another group that seems to play Playboy in one incarnation or another every year – as The “E” Family or Sheila E (solo or, my favorite, leading her Christian Jazz band Writes of Passage) or under patriarch Pete. Regardless, they always offer up a musically scintillating and entertaining show. This time, though Pete Sr. was the leader, everyone had a chance to shine, including Bay Area mainstay guitarist Ray Obiedo (they played two of his compositions including “Brasileiro” which included an interlude through Herbie Hancock’s “Maiden Voyage) plus solos for saxophonist/flautist Justo Almario and bassist Marc VanWageningen. One funny moment was when keyboardist Joe Rotondi started in on Fender Rhodes for the second number, we all wondered where the sound was coming from…because no one could see him sitting so low behind Pete…that is until an overhead shot from the always on-point screens revealed his presence. Humor abounded as Pete threatened to sic El Chapo on Donald Trump (his sons quickly walked him away from the mic). Superstar Sheila (who got down on an Arrowhead Water jug) spent most of her time low key behind the drums, pausing at the end of her last solo to softly whisper, “Prince, we love you and miss you.” Also touching was Papa Escovedo leading his grown-up bambinos through their paces as they each took a conga and played a roots piece together flawlessly and fluidly…I mean as if you could have awoken them from a heavy sleep and they could run that voodoo down! 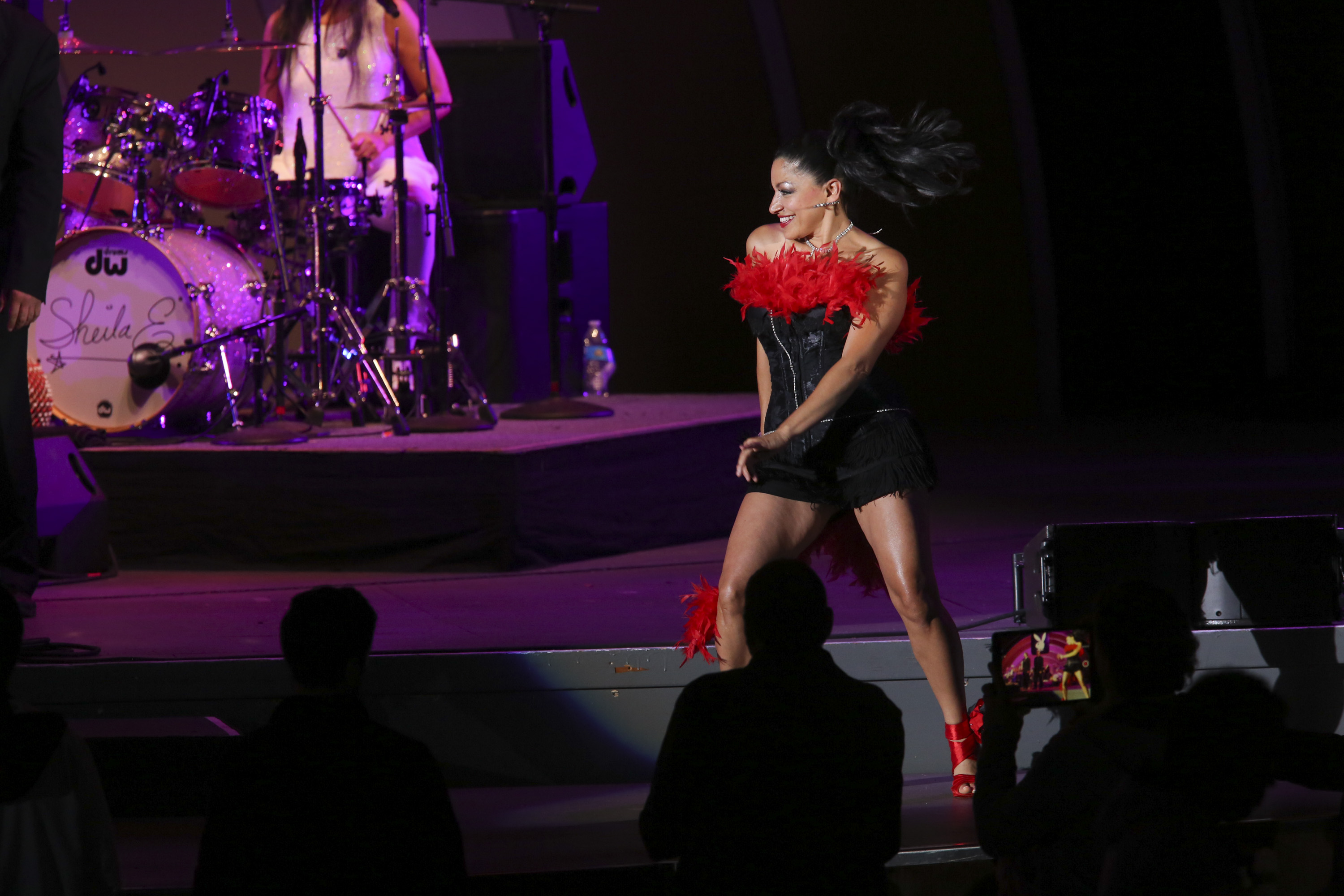 The clan closed with a festive piece that also found una mas Escovedo getting her “ZanySexyCool” turn in the spotlight – youngest daughter Zina Escovedo, resplendent in a dazzling black and red salsa ensemble. It was a heartwarming close to an exceptional day of Playboy Jazz for the history books.

Read Review for Day 1 of the 38th Playboy Jazz Festival by clicking HERE!