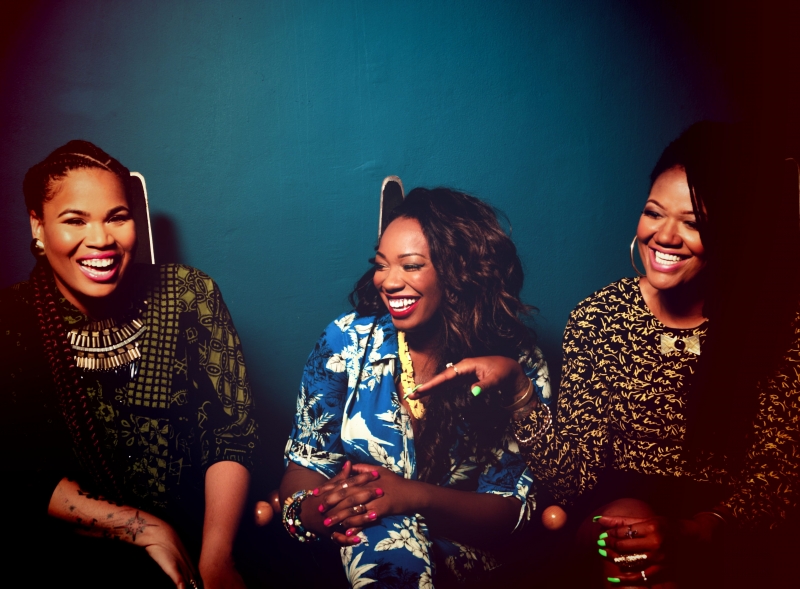 For the past several years, twin sisters Amber and Paris Strother, and Anita Bias – collectively known as KING – have been building a fan base from Los Angeles outward with their loving homage to the synth, Moog bass and rhythm machine groove of the `80s via inspired original material and choice covers. The fan base includes Erykah Badu (like a big sister) and Stevie Wonder who never misses an opportunity to champion creative new ladies of soul conscience. This year, the talented trio finally completed its long incubated debut, We Are KING. Last Thursday at the world famous Troubadour in West Hollywood, they stood before an adoring crowd that filled the room with body heat, love and unyielding support.

KING’s sound is a warm, soothing and affirmatively uplifting amalgam of classic soul, smooth jazz and contemporary gospel that is spellbinding at its best, pulling inspiration from respected bands such as Mtume, Rufus featuring Chaka Khan and Steely Dan, family groups Debarge and the Clark Sisters, super woman Patrice Rushen, and self-contained masters such as recently departed Kashif and the aforementioned Stevie Wonder. On records, multi instrumentalist Paris creates an intimate kingdom of music with the addition of live guitar and horns while singers Amber and Anita give you layered harmony and solo step-outs upfront. With the studio sheen, it’s an aural swirl of harmony and groove – near perfect every time.

However, recreating that vibration in concert is a hit and miss affair for the ladies largely due to the humble reality that they are rolling alone without backup musicians, which means a great deal of the music and background vocals are programmed and sequenced. Yes, the ladies do sing and play live, but there are moments when staying on pitch and in unison become issues largely due to technicalities with the ladies harmonizing with their recorded selves or with testy keys and synths known to bend pitches unexpectedly. Lay people’s ears, especially those of fans blissfully singing along, won’t pick up on most of this. But for any musician or attentive listener, the slips are jarring and detract from the beautiful sentiments of KING’s lyrics and their otherwise haunting voices.

The other problem is that there really isn’t a lot happening onstage to keep one riveted. Only one song, “Carry On,” had a hint of choreography (and a welcome bit of jazz scat singing). And the ladies essentially are positioned in a triangle formation with the singers upfront lit from underneath and Paris on a riser in back at command control with her banks of machines. By default, Paris is the most interesting one to watch, especially when her left hand digs in for synth bass runs.

Foe those already madly in love with KING, it’s all about the mood they create and the way the songs feed their souls. Numbers such as “Hey,” “Supernatural,” “Love Song” and “Mister Chameleon” have a wraparound sound that is feel good to the max. “Red Eye” sounds like a mash up of Wonder’s “Rocket Love” and “I Can’t Help It” while “Native Land” recalls the sweeping grandeur of Rufus’ “Egyptian Song.” Brief detours into old school favorites such as “All This Love” and “Computer Love” push all the right buttons. And the group’s encore sent everyone home on a natural high, many purchasing the CDs and vinyl LPs the group had for sale as they exited.

With the Berklee School of Music figuring prominently in the ladies’ origin, there is no doubt that all is needed is some fine tuning with their live presentation. Overall, KING remains a strong act to keep your ears on in their recordings as they find some subtle ways to perfect the sound and spice up their presentation of their lovely songs in performance.