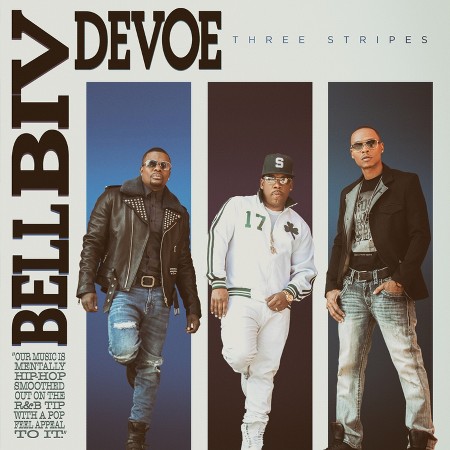 Three Stripes has its share of highlights, in spite of the trio’s lengthy hiatus.  The two best songs from the album arrive at the end.  “Finally” employs the talents of another 90s R&B group, SWV.  While “Finally” has an old-school sound, it plays to the strengths of its personnel.  This grown-n-sexy lane is a perfect match for Bell Biv Devoe because they aren’t forcing things or trying to be something they aren’t.  The same can be said of SWV, who certainly would sound ill-matched to the hypersexualized R&B of modern times.  Even though it embraces classicism, the bumping kick drum adds the swagger of the 2010s.  The other standout is “One More Try,” featuring Boyz II Men.  Once more BBD look back to where their “bread is buttered,” yet don’t sound out of touch with contemporary R&B. The sound and overall vibe of “One More Try” feels natural; BBD are in their proper niche.

Beyond “Finally” and “One More Try,” Three Stripes has other good, if not necessarily great moments.  The third best song is “Run,” which, again, looks back to the 90s.  The sample used is apparent from the start – Notorious B.I.G. classic, “Hypnotize.” While the trio rely heavily on the gem, the record is energetic.  They don’t sound bad on “I’m Betta,” but it feels slightly more forced than the crème de la crème, particularly the rhymes.  Still, “I’m Betta” easily trumps a questionable moment like “Hot Damn.” While prejudging a song by its title should be discouraged, as the title suggests, it lacks depth. The song suffers from being more sound than substance, trying too hard to assimilate to the times.  It’s worth a head nod or two, but it’s temporary at best. “All Dat There” isn’t a miscue, but it also doesn’t ascend to the next level. Vocally, nevertheless, BBD still have mad pipes.

All in all, Three Stripes has a sufficient amount of enjoyable moments to satisfy listeners.  Furthermore, 90s R&B enthusiasts have something to sink their teeth into.  At just ten tracks, this skinny, 35-minute R&B album plays well to its base.  The album is imperfect, with the biggest culprit being the material.  The biggest moments shine – “Finally,” “One More Try,” and “Run” – while other moments diminish the quality a smidge.  Three Stripes won’t reinvent Bell Biv DeVoe, but it will make folks reminisce.