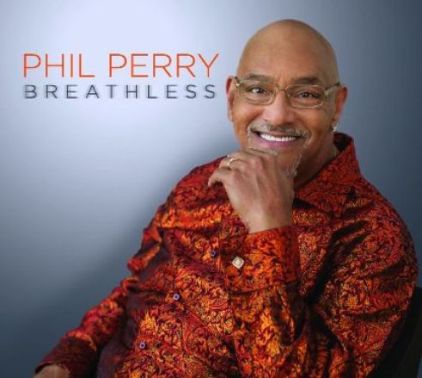 What entails the success and stability of musicians are those who simply stick to what they artistically know best no matter what the record buying public may dictate. In other words, those who stay true to their truthful calling can carry their career many places that eventually lead to staying power in the industry along with a loyal fan base and consistent radio following. Count soul/jazz stylist Phil Perry as one who has captured the ears and hearts of the adult contemporary soul market since stepping to the solo microphone in the early nineties, especially with his incredible perspective on classic cover songs. It becomes an even sweeter treat to hear this also in-demand session background vocalist every time he enters the recording studio. Armed as always with his delectable creamy tenor and rich falsetto, Perry’s latest, Breathless, is a continuation of his long association with Shanachie Entertainment and longtime producer/keyboardist/songwriter, Chris ‘Big Dog’ Davis. True to form from his previous work, the musical elixir always lies in Perry’s song choices including familiar blasts from the past and complimentary arrangements that accent his vocal capabilities.

The title track drops a tantalizing mid-tempo funky ride that suits Perry’s smooth tenor and Davis’ sparkling keys and brass, augmented by bass guitarist Asa Livingston and guitarist Robbie Day, while “Do Whatcha Gotta Do” rides on a sophisticated Brit soul vibe. “Nobody But You” gently sways between Tony DePaulo’s guitar framing and solos, Perry’s cradling backing voices and catchy subtle funk grooves and strings. Of course, Perry is a master lead voice as evidenced by “Never Can Say Goodbye,” exercising his full range that is capped by those signature effortless trademark falsettos. The sweet and sensual, “Moments in The House of Love,” co-written by Perry and Davis, switches up from the contemporary to a more intimate acoustic jazz setting with Davis playing piano and tasteful bass.

As for the covers on Breathless, there are two that particularly stand out. The 5th Dimension’s platinum smash hit, “One Less Bell to Answer,” sustains the melodic integrity but is enriched with soulful inflections by Perry and saxophonist Joe Cunningham (Pieces of a Dream, James Day). The same applies to “Love’s In Need of Love Today,” from Stevie Wonder’s masterpiece Songs in The Key of Life, backed by gospel ensemble Kevin Moore and Devotion. However, the minor letdown comes from jazz guitarist Lee Ritenour’s, “Is It You?,” which does not excel on the level of Breathless’ other tracks and is an interestingly brief two and half minutes which disallows the song to fully develop on all aspects. Yet even this blip never impedes this overall reliable vocal experience from Perry. Four and a half stars out of five.