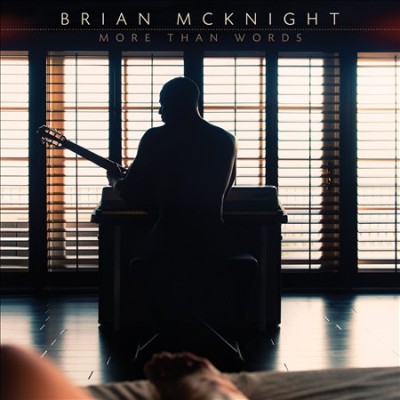 Brian McKnight | More Than Words
Entertainment One
by Brent Faulkner

R&B veteran Brian McKnight continues on the indie route with the
release of third Entertainment One (eOne) effort, More Than Words.
More Than Words is McKnight’s 15th studio album. Throughout the course
of the effort, McKnight continues to showcase his musical talents,
serving as the set’s executive producer, multi-instrumentalist (bass,
keyboards, guitar, etc.), songwriter, and most importantly, vocalist.
While he wears most of the hats, he collaborates compositionally with
pop singer/songwriter Colbie Caillat (“More Than Words”), as well as
sons Brian McKnight, Jr. (“Slow” and “Ididntreallymeantoturnuout”) and
Niko McKnight (“The Front The Back The Side”).

Amongst the set’s best tracks are “Don’t Stop”, “Letsomebodyluvu”, and
“Sweeter”. “Don’t Stop” initiates the project strongly with an
‘funkifized’ groove. McKnight embodies his typical ‘lover man’ vein,
inclusive of a lovely falsetto. “Don’t stop moving / don’t stop grooving
with me,” he sings compellingly on the chorus. On “Letsomebodyluvu”,
McKnight’s jazzed-up side show up throughout the harmonic progressions.
Overtly adult contemporary R&B, “Letsomebodyluvu” sports an ‘older – grown folks’ sound. Making a series of statements (and questions) on the chorus, McKnight ultimately summarizes with lyric “Will you let somebody love you, love you, love you, love you?” On early pre-release
single “Sweeter”, McKnight proclaims “Everything in my life is sweeter/
and it’s all because of you…” More than other selections, McKnight
sounds deeply invested, delivering magnificent vocal nuances and ad
libs.

More Than Words has other good, though not necessarily ‘great’ moments.
Single “4th of July” analogizes love to Independence day, which may be a
stretch, but at least proves to be a compelling one. “Nothing But A
Thang” continues to allude to jazz with the refrain’s metric twist while
penultimate cut “Ididntreallymeantoturnuout” (featuring Brian McKnight,
Jr.) transforms into a full-fledged jazz cut, intact with a trio of
piano, upright bass, and drums. With the good also comes the not
necessarily bad, but the ‘humdrum’. “Livewithoutyou” feels
underdeveloped – it’s as if McKnight doesn’t ascend to the next level
vocally or musically. “Made Fore Love” deviates slightly from the usual
BM script, but also seems to lack some finesse despite the extra ‘x
factor’ and lovely vocal harmonizations. A trio of cuts “Slow”,
“Another,” and “Trying Not To Fall Asleep” all possess standard
McKnight-isms, but none truly separate themselves as worthy company
amongst the artist’s most elite on this affair (aforementioned) or
throughout his storied career.

When it’s all said and done, Brian McKnight delivers an ‘unmemorable’
album. Sure, there are some solid tracks and McKnight’s musical gifts
and skills are undeniable throughout, but compared to his best and
heralded classic material, the majority of More Than Words doesn’t reach
the same glory failing to distinguish itself. “Back At One” fails to be
outshone by anything, even the effort’s crowning achievement in
“Sweeter”. More Than Words successfully whets the palate, but ultimate
the taste isn’t long-lasting.