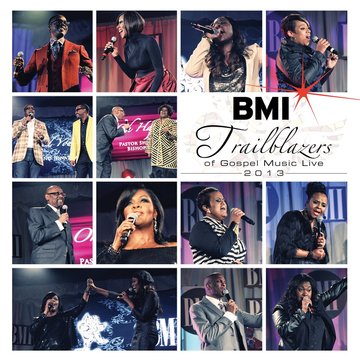 In the past thirteen years, BMI has honored those whose contributions to the gospel industry raised the artistic and spiritual bar for generations to come. The class of 2013 of the BMI Trailblazers of Gospel Music spotlights the works of Tramaine Hawkins, Edwin Hawkins and Kurt Carr with interpretations by their many peers. For the first time in the BMI Trailblazers’ history, the star and soon to be star-studded 14th Annual festivities are being released to the public. Ten tracks delivered by legends Yolanda Adams, Bishop Paul Morton and Shirley Caesar and an impressive youth movement of Amber Bullock, Anaysha Figueroa and Jason & Jonathan Nelson pay homage to some of the most crucial songs of the Hawkins and Carr’s stellar careers.   While the final selections chosen for this Entertainment One Music recording are fairly favorable, there are a few tracks that literally shift the worship atmosphere and elicit sincerely heartfelt testimonies.

Anaysha Figueroa’s convicting take on Tramaine Hawkins’ “Holy One” feeds mightily off a key lyric: “I fooled around much too long.” Seamlessly blending jazz phrasing and gospel sensibility, Amber Bullock nails down “For Every Mountain,” extremely familiar material from the Sunday Best alumni who recorded this Carr composition on her debut album, Thank You. Jason and Jonathan Nelson cover Edwin Hawkins’ “I Need Your Spirit (Fall Fresh on Me),” which incorporates sophisticated soul and pristine brotherly harmonies that immediately command praise from the BMI attendees.Though part of one of gospel’s extended families, Kierra Sheard (daughter of Karen Clark Sheard) continues to carve her own identify in her maturation process, showing another side beyond her usual urban contemporary approach on “This Day.”

The veterans deliver during their spotlight, even though with a few mixed results.  Adams’ passionate soprano launches Tremaine’s “He Brought Me” into another unforgettable Holy Spirit experience.  While Morton and Caesar’s preaching inflected delivery on Edwins’ groundbreaking gospel rouser, “Oh Happy Day” are unquestionable, somehow the overall effort falls a bit short. Co-Producer Donald Lawrence & Co. provides a strong vocal support system for all of the soloists. Yet their rendition of “In the Sanctuary” does not quite compare to The Kurt Carr Singers’ original version with their electrifying dynamics

All aside, this BMI Trailblazers of Gospel 2013 compilation debut reminds those of these movers and shakers who emphasized the continued importance of contemporary urban praise and worship on the radio and in the church.   Four and a quarter stars out of five.