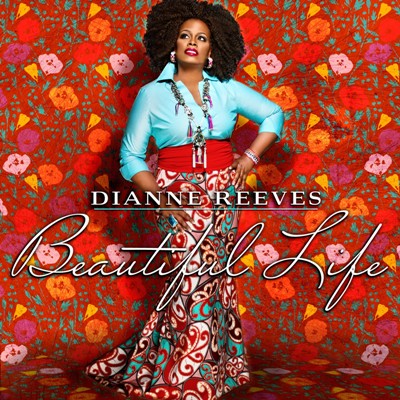 Sometimes the element of surprise conceived by the creative minds of musicians remind me of the hook from an inspirational pop hit: “Everything is beautiful in its own way.”   Growing up versed in jazz but always willing to cross musical boundaries, Dianne Reeves completely invested in whatever genre she could adapt to her inimitable vocal style.   From her appreciation of Motown, especially the conscious writing of Marvin Gaye, her exposure to folk and world music (working with Sergio Mendes and Harry Belafonte), being mentored by jazz trumpeter Clark Terry, and inspirations from jazz vocal masters such as Sarah Vaughn and Ella Fitzgerald were an extraordinary foundation to build from.

Since taking off on a national platform in the mid-eighties for Blue Note Records, Reeves’ eclectic format occasionally frustrated certain critics. Yet the astounding balance of musicality garnered several hits in her early career, captured on The Best of… in 2002. Though her four Grammy Award wins for Best Jazz Vocal Performance: In The Moment: Live in Concert, a tribute to Sarah Vaughn entitled The Calling, I Remember and the 2006 soundtrack, Good Night and Good Luck, further proved Reeves’ heart was more firmly planted with her traditional jazz upbringing.

That aside, Reeves delivers her most triumphant effort since the Vaughn tribute with her latest CD, Beautiful Life, encompassing several jazz-tinged sliced and diced covers, one of Ethel Waters’ signature pieces and some pleasing contributions from Reeves and co-producer Terri Lyne Carrington. Marvin Gaye’s sultry ballad, “I Want You”, opens with a warmly wrapped soulful package, capped with Sean Jones’ trumpet solo. The same goes for “Dreams,” the Fleetwood Max top forty pop smash from the seventies (joined by keyboardist Robert Glasper). In flexing her vocal confidence, Reeves transforms “32 Flavors” (first performed by indie folk rock star Ani DiFranco), into a succulent funk recipe. However, her jazz roots are where she truly excels with the slow brewing twist of “Stormy Weather,” the classic torch song about a turbulent relationship first sung by Ethel Waters in 1933.

If there was ever an ideal duet partner for Reeves, Gregory Porter’s hearty, organic jazz/soul mix fits the bill. Their unashamed sexiness on “Satiated (Been Waiting),” never comes off as tacky or crude. Other original on Beautiful Life, such as “Cold” and Esperanza Spalding’s “Wild Rose,” do not emotionally resonate as much, though the latter lends some empowering reminders about emotional freedom. Yet Reeves’ own “Tango” displays a masterful lesson on vocal control on a wordless melody set to a jazz fueled tango and a fiery samba in the final minute and a half.

Beautiful Life truly soars due to Reeves’ strong focus on song choices that showcase her musical diversity while understanding her genuine capacity as a jazz stylist. When it comes to the element of beautiful surprises, Beautiful Life makes perfect sense. Four and three-quarter stars out of five.