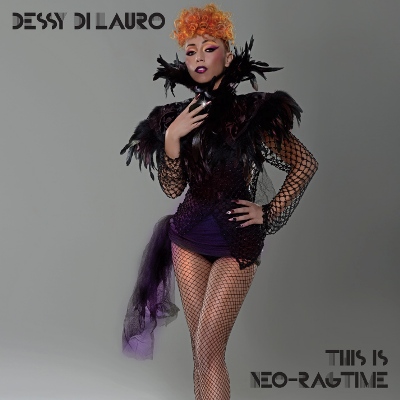 Dessy Di Lauro | This Is Neo-Ragtime
by Brent Faulkner

The “Hep Rag (Introlude)” establishes Neo-Ragtime’s tone from the onset, featuring the aforementioned horns and cues characteristic of ragtime and 20’s jazz. “Mysterious”, “Jump ‘N’ Jivin’”, and “Lost In The Jungle” are among the very best moments of the effort. “Mysterious” has ‘cabaret’ written all-over it, blending ‘old-school’ with hip-hop drum programming; it provides the first signature ‘bang’ of the set. Di Lauro’s vocals, always impressive, command on “Jump ‘N’ Jivin’”, the energetic single from the set. “Jump ‘N’ Jivin’” lifts musically from the esteemed big band classic “Sing, Sing Sing”. The upright piano truly shapes the sound – adding to the ‘vintage’ appeal and elevating its status. The seven-minute juggernaut “Lost in the Jungle” embodies the raucous jungle-boogie of the 20’s – think Duke Ellington, only updated for 2013. One of “Jungle’s” signature moments is the change of mood and pace towards the end, distinguished by emotional lyrics (“Help me find my way / out of this jungle…”).

The aforementioned selections aren’t the only selling points for This is Neo-Ragtime. On “Loved”, Di Lauro temporarily eschews the rag and stride influences in favor of contemporary R&B. Even so, the horns still play a vital role. “Sweet Georgia Brown”, featuring rapper Anon, completely transforms the jazz standard better known as “Sweet Georgia Brown”. One unfamiliar with the original probably wouldn’t notice it were a classic given Di Lauro’s creative, artistic treatment. “Why U Raggin’”, another solid showing, features arguably the effort’s most addictive hook. While there are no misses amongst the ten songs, closing cuts “Bringin’ It Back” and “Never Existed” don’t shine quite as brightly. To it’s credit, “Bringin’ It Back” contrasts everything else given its tropical influence.

Essentially, This is Neo-Ragtime is both a superb and an incredibly unique album. It defies being cornered by one specific label, thriving off of its unpredictability and Di Lauro’s artistic eccentricities. Embodying the classic, the contemporary, and restless creativity, Di Lauro ultimately delivers a home-run. This is Neo-Ragtime is an album deserving recognition from both critics and listeners alike; enthusiastically recommended.