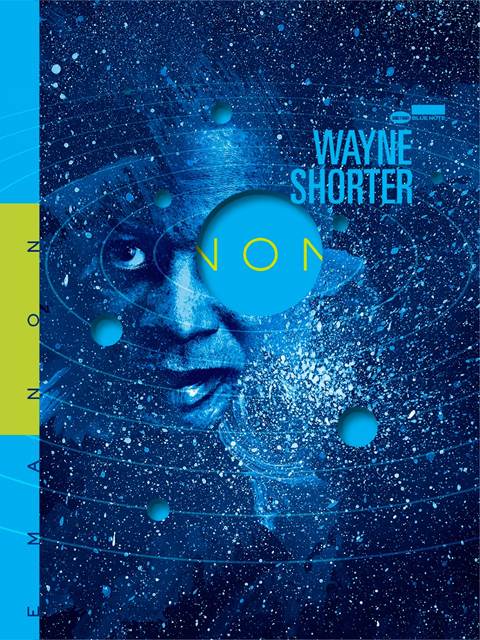 August 25, 2018 marked the 85th birthday of one of contemporary music’s finest composer/musicians, Wayne Shorter. In an astounding career that has seen him ascend from Art Blakey’s Jazz Messengers and the second classic Miles Davis Quintet to co-founding Weather Report, all the while composing jazz immortals such as “Footprints,” “Speak No Evil” and Nefertiti” (to name just a few), all that Shorter has achieved to date is more than enough to earn him the Kennedy Center Honor he will be receiving later this year. The reason he remains such a hero to many is that Wayne Shorter is still stretching for deeper expressions of further-reaching fusions and alchemies. The proof lies in his latest ambitious 3-CD work Emanon on which he pools new and old compositions – with chamber orchestra in the studio then with his jazz quartet live on stage – then repurposes and dispatches the music as the score for a graphic novel starring a superhero of his creation called Emanon (“no name” spelled backwards). So, Shorter not only composed the music, he co-wrote the story for the grown folk’s comic book with Monica Sky which was illustrated by Randy DuBurke. That makes this not just Classical Jazz fusion musically, but a milestone mashup of music, visual fantasy and sci-fi literature all rolled into one.

The music of Emanon is as majestic as any soundtrack for a superhero is meant to be with titles such as “Pegasus,” “Prometheus Unbound” and “Lotus.” Yet it also delves into the inner story of both the character as well as the people he watches over. At heart, Emanon is a soul-searching work about the abolishment of fear in all its crippling forms. Extended pieces such as “The Three Marias” and “Lost and Orbits (Medley)” whisk the listener on an inner journey concerning the struggle to be fully liberated to live one’s highest life for their self and the world around them. It is music that can be listened to and, better still, absorbed in several contexts: as the literal score for a graphic novel that comes with the package in either its 3-CD standard edition or the deluxe edition that also includes 3 180-gram vinyl LPs all bound together in an elegant slipcase. Deeper still, it is a musical journey that can be embarked upon by listeners for their own free form meditations and adventures – to boldly go where once they may only have dreamed.  Throughout the score we hear Shorter’s soprano saxophone taunting and grappling with the forces of the other instruments – Danilo Perez’s piano, John Patitucci’s bass, Brian Blade’s batterie of drums and the 34-piece Orpheus Chamber Orchestra – ultimately to soar above them all in winged triumph, freedom and joy. It is a challenging yet exhilarating E-ticket aural ride destined to goad listeners for generations, standing tall as yet another mountain peak in the career of genius Shorter. As Patitiucci proclaims, Emanon marks “the fulfilment of a lifetime vision” for Shorter – an epic musical statement of artful storytelling on multiple planes for the purpose of higher contemplation and inspiration.

Though this work is intended to be enjoyed as a whole, pieces best likely as a gateway into the work in its entirety might be “She Moves Through The Fair” and “Adventures Aboard The Golden Mean.”